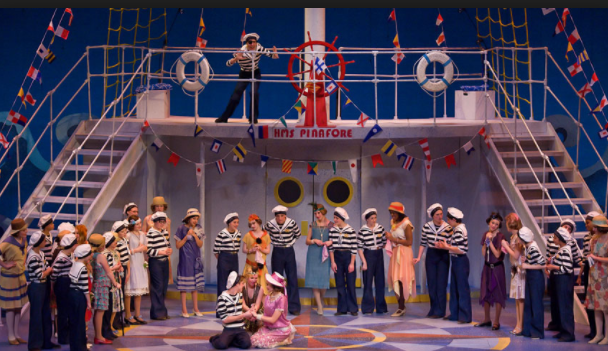 PERFORMED BY MOT CHILDREN’S CHORUS Michigan Opera Theatre Children’s Chorus presents Gilbert & Sullivan’s first smash hit full of their notorious satire and legendary tunesmithing. The Captain’s daughter is in love with a common sailor but, alas, betrothed to the First Lord of the Admiralty. Happily for them, “things are seldom what they seem.”

Sullivan was very sick while writing the music for H.M.S. He said, “It is, perhaps, rather a strange fact that the music to Pinafore, which was thought to be so merry and spontaneous, was written while I was suffering agonies from a cruel illness (kidney stones). I would compose a few bars, and then be almost insensible from pain…Never was music written under such disturbing conditions.”
–Sullivan

Why a Ship? • “Gilbert’s father had been a naval surgeon, and family tradition had it that they were descended from Sir Humphry Gilbert, the navigator who landed in Newfoundland in 1583 and, under Queen Elizabeth’s flag, established a first English colony in the New World. In any case, Gilbert loved the sea, and many of his “Bab Ballads,” had nautical themes.”
• Gilbert & Sullivan visited the naval base of Portsmouth, “where Nelson’s flagship, the Victory, was at anchor” to make sketches and models of the characters and set.

Compliments of The Gilbert & Sullivan Operas by Darlen Geis InfluencES

Songs from Pinafore are featured in a number of films. “When I Was A Lad” is sung by characters in the 2003 fantasy movie Peter Pan; “A British Tar” is sung in Star Trek: Insurrection (1998) and briefly sung in Raiders of the Lost Ark (1981). “For he is an Englishman” is sung in Chariots of Fire (1981), An Englishman Abroad (1983), and in the 2009 episode “Broken” of House. Matt Damon, as a young Edward Wilson, plays Little Buttercup in a Yale production and sings “I’m Called Little Buttercup” falsetto in The Good Shepherd (2006).