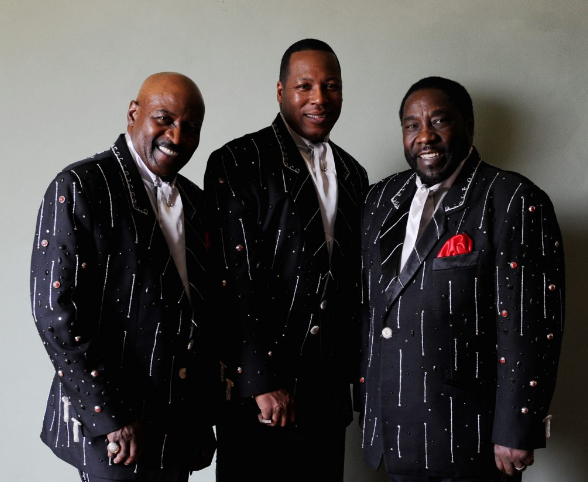 Legendary R&B trio the O’Jays are set to perform two shows December 29-30 at the Andiamo Celebrity Showroom in Warren.
In an interview with the group’s lead singer, Eddie Levert, he shared his excitement about performing at a venue like Andiamo, a place, he says is reminiscent of clubs from the past.

“Performing at Andiamo is almost like taking a step back in time. The upside to this concert for me is that this is our base. This is where we were born and raised. In clubs where you have maybe 400-800 people and you can be up close and personal where you can just go out and grab somebody and sing a song. I get a chance to go back to what I’ve done all my life and that’s to entertain people where they can look me straight in the mouth and know that it’s really me singing.”

Together since 1963, Eddie Levert, Walter Williams, Sr. and Eddie Grant are the O’Jays. Inducted into both the Rock and Roll Hall of Fame and the Vocal Group Hall of Fame in 2005, the O’Jays are R&B royalty with 9 Platinum albums, 10 Gold albums and 10 number one singles.

When asked to share his thoughts about the quality of music today, Mr. Levert had a lot to say. “The only difference is that back in our day you had the big radio stations that played all kinds of music, but today, they play just one kind of music. There is no variety,” Levert said.

“Today, all you can hear is R&B and rap and that is so boring. Do you understand ya’ll [young people] have boring radio? It’s not an experience anymore. It’s like drone music.”

The Canton, Ohio natives made the news in July after president-elect Donald Trump used their song “Love Train” during the Republican National Convention without the group’s consent.

Original O’Jays member Walter Williams said, “Our music and most especially, ‘Love Train’ is about bringing people together, not building walls. I don’t appreciate being associated with Mr. Trump and his usage of our music without permission.

Levert added, “I don’t agree, whatsoever, with Trump’s politics to the point where I think he just may be the anti-Christ.”

The O’Jays were invited to attend the RNC, but declined the invitation.

The group’s lack of support for the president-elect is the result of the racially charged and discriminatory platform that Trump ran on during his campaign. Levert said the African American community has to be more involved politically.

“Back then, they weren’t afraid to preach the message because the message hasn’t changed. It’s like Lil Wayne and all these people who want to say that they’ve never experienced racism. That’s because you’ve lived a sheltered life and you’re not mingling with the people any longer.”

The “Backstabbers” and “Love Train” legend believes the group’s success is the direct result of their large and loyal fan base.

“The one thing they gotta know is the people that come to see the O’Jays are the people that have made us who we are. We service those people. We have to treat them with the utmost respect because they are the ones who have brought us all of this way. They are the ones that have put us in the Rock and Roll Hall of Fame. So, those people are precious and they are really, really, really special to us,” Levert said.

The O’Jays will be performing December 29-30 at the Andiamo Celebrity Showroom in Warren located at 7096 E. 14 Mile Road in Warren, MI.

From the Michigan Chronicle