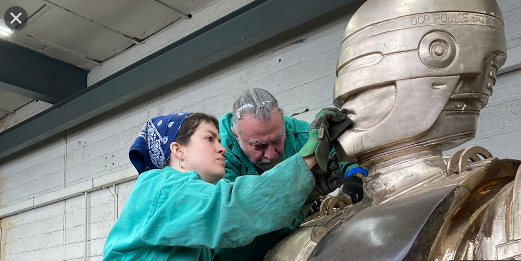 In the spring of 2011, Brandon Walley and Jerry Paffendorf were hard at work in Corktown. Starting with two long-vacant houses near Michigan Central Station, their group, Imagination Station, had dedicated itself to commissioning local public art projects.

They’d already helped make a few attention-getting pieces a reality, such as the Hygienic Dress League sign that once graced on the Roosevelt Hotel with solar-powered neon seagulls, or “Monumental Kitty,” Jerome Feretti’s brick-and-mortar sculpture near the old Tiger Stadium site.

Sitting in an Eastern Market coffee shop many years later, Walley recalls those exciting times. “It was our mandate to think of creative stuff we could do with art to call attention to the neighborhood while supporting local artists,” he says.

And then, 10 years ago this month, some wag tweeted at Detroit Mayor Dave Bing that Detroit needed a statue of RoboCop. The reason: Philadelphia had a statue of Rocky, and RoboCop “would kick Rocky’s butt.”