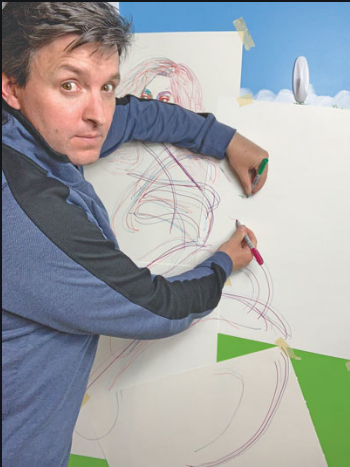 A Detroit nonprofit is getting a boost from a local artist who is pitching in with both hands.

Colin Darke, of Grosse Pointe Farms, works for Rocket Loans by day. In his spare time, he is an artist who has been using his unusual skills to help raise funds for Arts & Scraps in Detroit.

“Colin started with us as a volunteer and he has moved from there to trying to help support us financially,” explained Arts & Scraps Executive Director Ang Adamiak. “He uses his skill at being able to draw with both hands to gain a social media following, and he is using that power to raise money for Arts & Scraps.”

Darke is ambidextrous, which means he can use both hands as if they were his dominant hand. Having always been an art enthusiast, he started posting his talent of drawing and painting with both hands simultaneously on social media.

“I’ve been able to draw and write with both hands since forever,” Darke said. “A few years ago, my mom and wife were in the kitchen and my son could also use both hands, and I mentioned I could draw and write with both hands when they were talking about it. I didn’t realize how rare that was. So, I started putting up videos on TikTok and Instagram of drawing and writing simultaneously. A few of the videos went viral.”