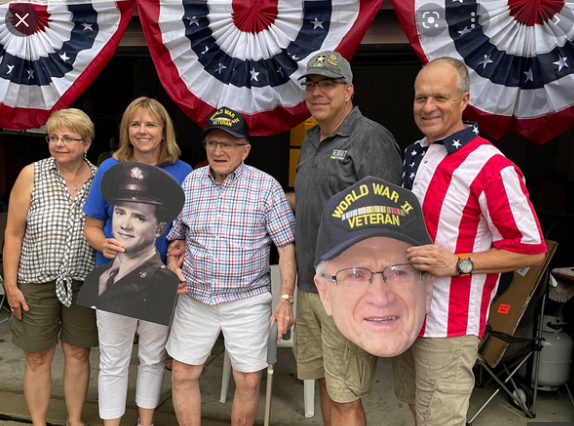 A highly decorated combat veteran who in a few days will celebrate his 99th birthday has been honored for his service in World War II.

Sunday evening, a motorcade consisting of over 50 vehicles proceeded from Hawkins Elementary School at Lee and Rickett roads to the home of Clemence Sperkoski to honor the man everyone calls “Clem”.

The soft-spoken Sperkoski told WHMI that the motorcade and party that ensued, “was all a surprise.” Some well-known public figures in Livingston County stopped by to show their support, among them Chief Judge Michael Hatty of the 44th Circuit Court, retired former circuit judge Daniel Burress, 22nd District State Sen. Lana Theis, and state representatives Bob Bezotte of the 47th District and Ann Bollin of the 42nd District – Theis, Bezotte and Bollin all being Republicans.

Bryan Bradford, who founded the Veterans Connected veteran support group, organized the motorcade. Bradford said, in his words, “It’s a complete honor to cover what I regard as the Greatest Generation.” He said the organization’s mission “is to help all vets get all the way home and leave no one behind.”