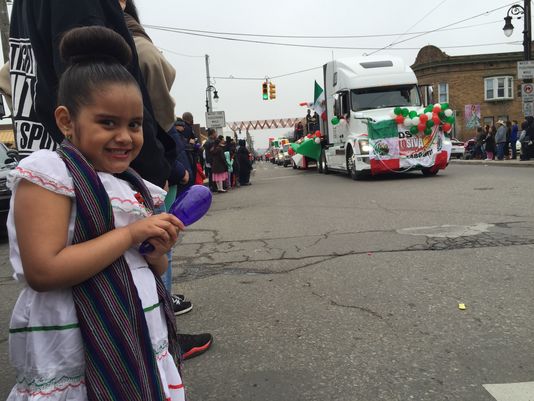 Before Sunday’s early celebration of Cinco de Mayo in southwest Detroit, Eftephany Ferreira put her young daughter in a pretty white dress, with green and red highlights like the Mexico flag, and pushed her hair up in a neat bun.

Little Valery Ferreira, age 5, looked like she could have been on parade.

Actually, she was supposed to be part of the parade, but her mother had to work Sunday and there was no time. They had enough leeway to watch along Vernor Highway at Springwells, and Valery kept a smile for the scenes passing by: swirling dancers, Mexico flag-bearers, full bands playing traditional music atop rolling trucks, and people throwing candy.

If Valery was disappointed she wasn’t marching along, her dancing and scrambling for treats seemed to say otherwise. Candy and colors can change things.