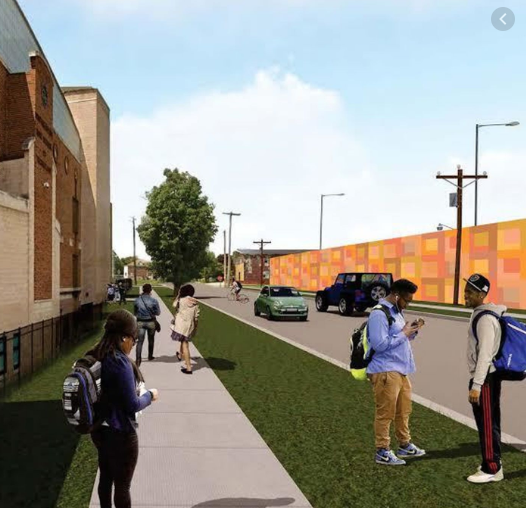 Fiat Chrysler Automobiles (FCA) and the city of Detroit are partnering on a project being described as “one of the largest municipal art installations in Detroit’s history.”

As part of the expansion of FCA’s plants on the east side, the automaker is constructing a wall running along Beniteau Street. Two sections of that wall will be a canvas for a 15-foot-high mural spanning 1,500 feet. The “north wall” will be across from Southeastern High School and the “south wall” will be near Kercheval Avenue and face a stormwater park containing a walking path, pollinator gardens, and pavilion.

The city of Detroit—through its Office of Arts, Culture and Entrepreneurship and City Walls Detroit murals program—is partnering with FCA to put out a global call for artists and muralists. On Friday, February 14, information on the application and selection process will be on the City Walls site.

The city says it is working with the community, including engaging students at Southeastern High School and Detroit Enterprise Academy, to determine design themes for the mural.

The selection committee will choose an artist or team by June 1, and the project is expected to be completed by October 30 this year.

“This wonderful gift from FCA is just another example of how much arts and culture are alive and well—and thriving here,” Rochelle Riley, the city’s Director of Arts and Culture, said in a release.

This mural project was part of the Community Benefits Agreement negotiated with FCA. In the agreement, the automaker committed to $7.1 million in infrastructure improvements along Beniteau Street that included “wall construction and beautification.”