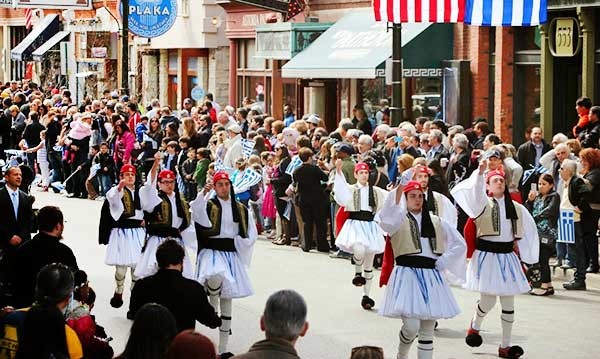 “Today we are celebrating the Greek community in Metro Detroit and we honor our proud Greek American history,” said Yanni Dionisopoulos, president of the parade committee.

Floats, church groups, classic cars and young men dressed as Greek honor guard soldiers, or Evzones, made their way down Monroe St. as paradegoers filled the narrow sidewalks of Greektown.

As the parade ended, the dancing began.

The crowd joined in on the fun and linked arms with the dancers to step along to the traditional Greek music ringing throughout the historic district.

The original Detroit Greek Independence Parade, “was started during World War II to raise money for war bonds for Greece, which was an American ally. The parades continued for several decades. The original parade stopped sometime in the late 1960’s.”

15 years ago, the non-profit organizing committee was able to bring back the parade, which has been held every year since.

Dr. Steven Kalkanis, Chairman of the Department of Neurosurgery for Henry Ford Hospital, served as the Grand Marshal for this year’s parade.

“There has never been a more exciting time to be in Detroit and I think it’s worth reminding each other and everyone that will listen- that the history of Detroit is made successful by our own Greek heritage,” said Kalkanis to the parade crowd.

“At the turn of the 20th century there were about 250 Greeks who came and settled in Detroit literally right here, right here on Monroe Street. And ten years later in 1919 there were ten thousand Greeks.”

Kalkanis credited those 10 thousand settlers with starting over 3,000 businesses in the community.

There are about 150,000 people of Greek descent living in Metro Detroit today.