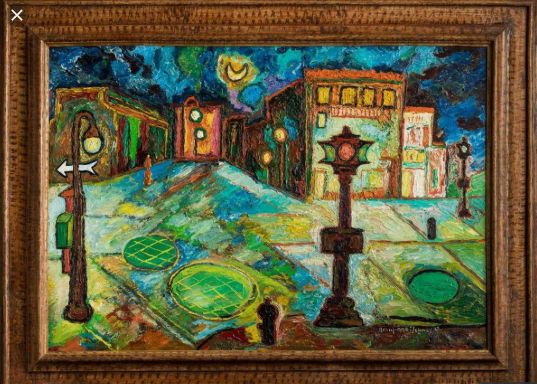 Detroit’s art scene last made national headlines in 2013, when the city explored selling the contents of the Detroit Institute of Arts to pay off its crippling municipal debt. The museum’s entire collection, which includes works by Velázquez, Van Gogh, and Rembrandt, was potentially up for grabs.

Even as a backlash to the sale mounted (the city eventually dropped the plan), a small, tightknit group of collectors was working on its own to foster arts and patronage in downtown Detroit through a group called the Detroit Fine Arts Breakfast Club. What started in 2009 as an informal grouping led by the collectors Harold Braggs and Henry Harper became, over time, a place where hundreds of people would meet local artists, view their art, and sometimes buy it.

“I just bought two artworks last week from someone in the Breakfast Club,” says Deborah Ford, a judge on Michigan’s 36th District Court and a collector of African American art. “I think they’re fabulous.”

That grouping has become the impetus for a forthcoming show at the Detroit Institute of Arts called Detroit Collects: Selections of African American Art from Private Collections (Nov. 12-March 1). There are 60 objects in total, drawn from 19 private collections.

The show includes one of the contemporary artist Nick Cave’s famous Soundsuits, an ebullient, full-body costume; an oil painting by Beauford Delaney, one of the midcentury pioneers of the Harlem Renaissance; and an image by the contemporary photographer Carrie Mae Weems, a MacArthur “genius” grant winner who had a retrospective at the Guggenheim Museum in 2014.

“The reality is that Detroit is one of the cities that’s supported African American art the most,” says Salvador Salort-Pons, the DIA’s director. As the museum assembled the exhibition, “there were some people we didn’t know who are big collectors, and then there are people who are already engaged with the museum.”