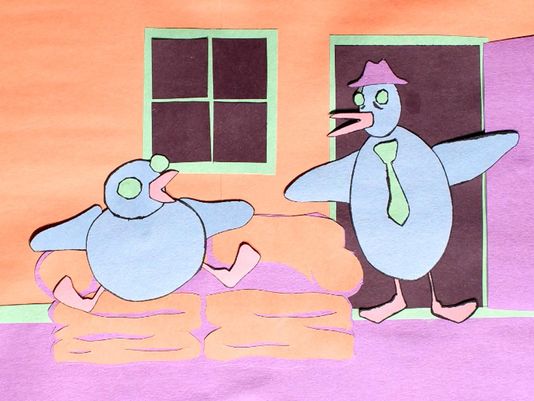 Michigan has no shortage of independent film festivals, but there are so few that focus on animation that Anthony DVS, a member Detroit’s Damned art group, decided to create his own.

This weekend at Tangent Gallery the first annual Detroit International Festival of Animation will screen 22 short animated films from the Metro region and around the globe, including selections from New York, Japan and Sweden. The event also includes an expo of local visual artists, animators, comic creators and zine publishers.

DVS, who produces the annual Damned art show and the Purgatory Film Exhibition, says the animation festival came out of a desire to team up with his wife, Dekilah Divine, a model and fellow art group member, to present something more lighthearted than his typically macabre art events.

DVS received 140 film entries from an open call for submissions.

“The styles range from digital, to traditional drawing styles, to stop-motion animation, and some that are more classic and elegant, and some of them are purposely wild and untraditional,” he says.

Two of the films came from animation students at the College for Creative Studies in Detroit. Harrison Schaeffer and Joe Uebie are juniors studying animation at the college where their entries began as class assignments.

Schaeffer’s submission, “Party Fowl,” is an oddly sweet comic vignette about an alcoholic father who still manages to provide for his son.

The film, which was his first made using construction paper, was based on a three-panel comic his classmate Chandler Candela drew for the college’s humor magazine The Peacock Drollery.

This is only Schaeffer’s second time participating in a film festival — the first being last year’s Fresh Off the Grill Film Fest in Royal Oak.

“There’s not much of a scene here,” he says. “There are a few studios opening up, and I’m definitely trying to get in contact with them, because if I could stay local that would be amazing. Otherwise, I would probably go to Georgia or California where animation happens, you know?”

Uebie’s submission, the one-minute Flash animated “The Shipwreck Interview,” is the result of a school assignment in which he was given the following phrase to write a film around: “Underwear: You hardly even need it.”

Uebie also noted the scarcity of work for animators in Detroit, and said he’s prepared to move out of state after he graduates next year.

“Unfortunately all the jobs are out west,” Uebie says. “Moving to another location is inevitable. I am looking forward to moving out to California and working for any of the studios I grew up watching.”

DVS says he hopes the festival will help foster a stronger animation and visual arts community in Detroit, and he already plans to produce the event again next year. He doesn’t know if any of the foreign filmmakers featured in the festival will attend, but he’s excited to help Detroit animators connect.

“We wanted to create something in the same vein as Spike and Mike, but make it our own as far as belonging to the city,” he says.

“Hopefully we will get more local artists and animators coming out of the woodwork to know that this is a place where they can find an audience for their creations.”