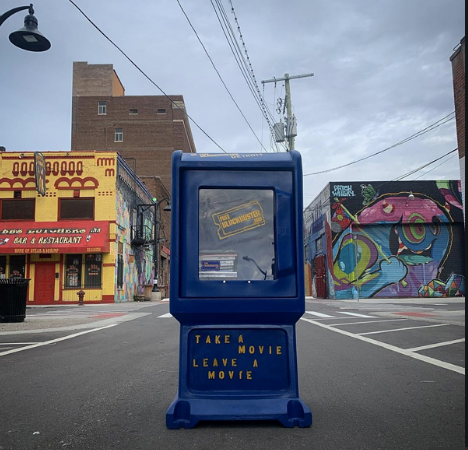 As a kid, Toscano and his brothers stormed the aisles of their local video store to put their new VHS player to work. Among the titles snatched: Bill Murray’s Stripes and 1977’s The Incredible Melting Man, which, according to IMDB.com, is about “an astronaut who is transformed into a murderous gelatinous mass after returning from an ill-fated space voyage.”

Years later, Blockbuster, Family Video, and most other video rental chains haven been utterly decimated by streaming services, not unlike the aforementioned melting man. (Well, there is one last remaining Blockbuster store, which is the subject of, get this, a newly released Netflix documentary. Oh, the cruel irony!)

But now, Toscano is joining fellow movie lovers across the country by bringing the old-school Blockbuster experience to life — and to street corners.

“Blockbuster was a big deal,” he says. “I talked to my wife and was like, I kind of miss going to a video store. To some, it may be an inconvenience, but it was an experience. My kids don’t know what I’m talking about,” he adds. “I would have loved to have done that with them, cruise around and pick movies out.”

Source: Detroit now has a Free Blockbuster box so you can swap DVDs or VHS tapes like the good old days (minus the late fees) | The Scene