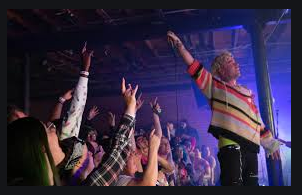 Deputat started taking pictures for Real Detroit Weekly around 2002. After being promoted to Art Director, he had the desire to do something different, to breakout. So he bought a camera, on a shoestring budget, and began taking pictures for the magazine. Once he left Real Detroit, and Detroit in general for Los Angeles, Jeremy began working for Interscope Records. It was a move that changed his life.

Now Jeremy says he has been to almost every continent, has gone on tour and taken pictures of Detroit music legends, like Eminem and Kid Rock. His amazing pictures have even been featured on the covers of prestigious publications, one stand out pic is Eminem‘s cover of Billboard magazine. He said one lesson he‘s learned over the years is to never move slow, and always be ready, you might miss your best shots if you don’t.