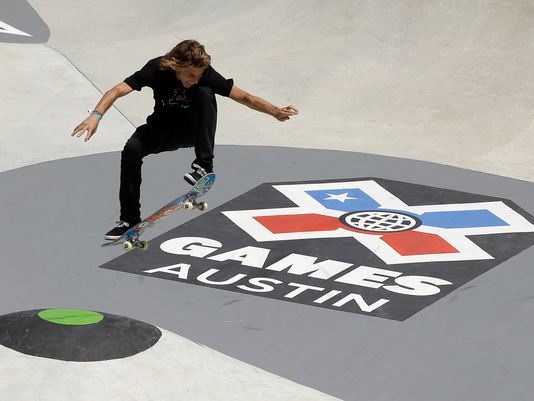 Detroit officials are considering making a bid for the Summer X Games for 2017 and 2018 within the next two weeks.

The city narrowly lost a previous bid in 2013 to host the popular weeklong nontraditional sports event for four summers in a row. But now that the games are leaving Austin after this year’s run, Detroit has a chance to potentially host two consecutive Summer X Games in the future.

“We are excited that the opportunity is in front of us again,” said Dave Beachnau, executive director with the Detroit Sports Commission, a subsidiary of the Detroit Metro Convention and Visitors Bureau. “If our research proves out that we should push forward with this, I think things will happen fairly quickly.”

Several representatives of the X Games, which is owned by sports network ESPN, visited Detroit on Thursday and toured possible X Games event venues, including Ford Field and the new arena district under construction, Beachnau said. They met with representatives of the Ilitch family’s Olympia Entertainment and Dan Gilbert’s Rock Ventures and gave a presentation about the games, he said.

The Detroit Sports Commission will be handling the city’s potential bid but has yet to decide whether to submit a bid, Beachnau said. A decision could come soon, though, as May 15 is the bid deadline, and ESPN could announce the winning city in mid-to-late June.

“The good news is we’ve been through it once, so we’re not reinventing the wheel,” Beachnau said. “But at the same time we need to be sure we have a solid business model.”

Beachnau said many details of Detroit’s possible bid are still being determined, including attendance projections and the anticipated cost of putting on a Summer X Games in Detroit. X Games events generally rely on private-sector money, he added.

“Those are the things we are just starting to analyze,” he said.

The Summer X Games drew about 160,000 fans to Austin during its first running in June 2014, and 136,845 showed up last year, according to media reports. ESPN officials have said it takes roughly $20 million to put on an X Games.

Representatives for Olympia and Bedrock referred all comment for this story to Beachnau’s sports commission.

The Sports Commission played a supporting role that year and put together the group’s bid documents. For Detroit’s potential 2017-18 bid, the commission is leading the charge.

The Summer X Games initially planned to stay in Austin through 2017, but games officials recently cut short their stay by one year. The games have been held at a racetrack and entertainment complex called Austin at Circuit of The Americas that is situated on the outskirts of the city.

Beachnau said it’s his understanding that X Games officials believe “an urban setting suits the event much better.” He was unaware of any cities that have officially submitted bids for the 2017-18 games but has heard that several cities are interested, including cities in the Pacific Northwest.

An X Games representative on Friday said “We had good meetings in Detroit and look forward to continuing discussions.”