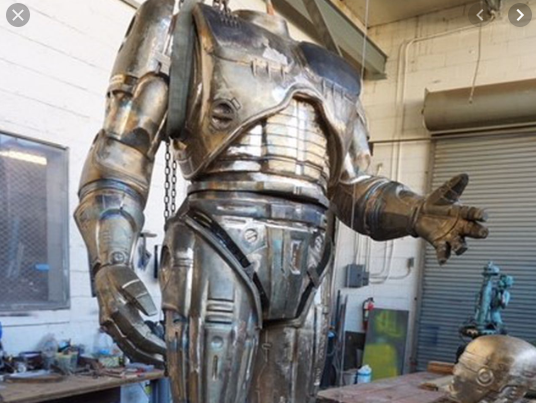 Detroit will soon have its long-awaited RoboCop statue on display in the city. After nearly 10 years in the making, the giant bronze statue depicting the cyborg law enforcer from the 1987 movie, who patrolled the streets of Detroit in the near future, is nearly complete.

Organizers, who started the Kickstarter campaign in 2011, tell MLive the statue should be done by the end of March. Once it’s complete, the statue will be put on display outside the Michigan Science Center on John R St. most likely sometime this spring.

“We wanted the statue to be outside on the grounds of the Science Center where people didn’t have to pay money to go into the museum to see it,” said Brandon Walley, one of the people behind the project. “We wanted people to be able to see it anytime just by walking.”

Walley says the Science Center hasn’t picked a spot yet where it will be displayed, but a huge ceremony is expected to take place. He says there’s a good chance actor Peter Weller, who played RoboCop, will be there.

“Weller and the original director have expressed interest over the years in coming to the unveiling, but there’s no guarantee. We have built up a relationship with Weller. We met him at a local comic con a few years ago and got to know him. He’s fascinated with Detroit and the city’s architecture.”

Once the head is on, the statue will be 11 feet tall. It has a stainless steel base and weighs a whopping half a ton. Venus Bronze Works of Detroit is a big part of the project. Walley says it was important that as much of the statue was built in Detroit as possible. He says a lot of the Kickstarter money went into giving the restoration company the tools they needed.

Source: Detroit’s giant RoboCop statue almost finished after nearly 10 years: Where it will be displayed – mlive.com