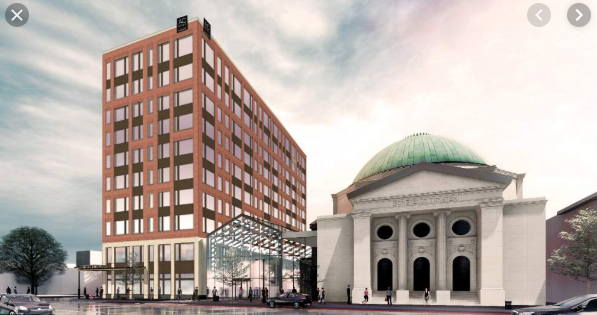 The first AC Hotel in southeast Michigan is slated to open at the historic Bonstelle Theatre in Detroit.

In addition to the construction of a 153-room, 10-story hotel, the theatre will be renovated. It will be used for live performances and events.

Theatre renovations will restore the outside of the building to its original 1903 Albert Kahn design and the inside to its 1925 redesign by theater architect C. Howard Crane under the direction of its then-new owner, Jessie Bonstelle.

Detroit-based Patrick Thompson Design will led the project’s design and the Christman Co. will manage construction.

A glass conservancy will connect the theatre to the hotel.

“We are very excited to be bringing the AC Hotels brand to Detroit, and to be doing so in such grand fashion with the connection to the Bonstelle Theatre,” said David Di Rita, principal of the Roxbury Group. “We take a great deal of pride in pairing high-end hospitality with iconic historic properties, and we are honored to be restoring the beauty of the Bonstelle and seamlessly integrating it with the modern sensibility of AC Hotels.”

The Bonstelle Theatre opened in 1903 as the Temple Beth El synagogue before it was renamed the Bonstelle Playhouse when the synagogue moved in 1925. It was then a movie house after The Great Depression.

WSU acquired the theatre in 1951. It has been used for student productions, but it was announced in 2018 that it would be decommissioned after the Hillberry Theatre expansion.

Construction on the $46 million project will begin this summer, and the hotel is slated to open in late 2021.