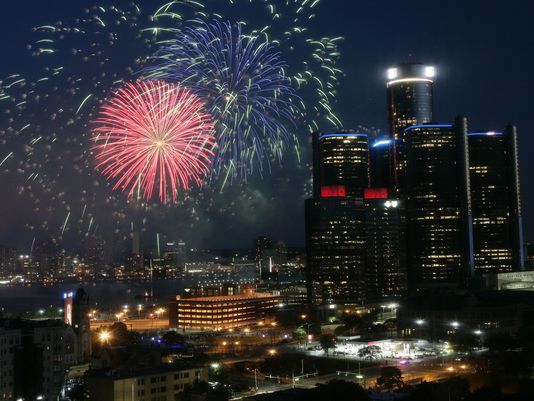 A mammoth display of colorful fireworks exploded over the skies of downtown Detroit’s riverfront Monday night with tens of thousands watching the fiery spectacle from the U.S. and Canada.

“I love it. It’s great,” said Donald Jones, 56, of Roseville, who came with his wife and 5-year-old son and was among the throngs of people set up on Woodward next to Jefferson.

And another spectator, Rosemary Kennedy, of Troy, exulted: “It’s wonderful. I’m really enjoying it. It makes me proud of Detroit.”

Organizers billed the show as one of the largest fireworks displays in the country, with over 10,000 pyrotechnic effects that would be visible for miles.

“It’s exciting,” said Michelle Hill, 62, of Detroit, who arrived at 5 p.m. to get a parking space and was among many who set up a lawn chair uphill from a grassy stretch of Hart Plaza. She added that she liked “the camaraderie, meeting all these people…it’s really nice.”

More than an hour before the event, about 45,000 had already crowded into the fireworks viewing area, said Officer Shanelle Williams, a Detroit Police spokeswoman. Dozens of officers stood guard on Jefferson Avenue and directed traffic, including a few on horseback. Several hundred stood in line to get in, while dozens more seemed to forgo the effort altogether and set themselves up on the sidewalk for at least a few blocks. In the airspace over the river, antique airplanes swooped by.