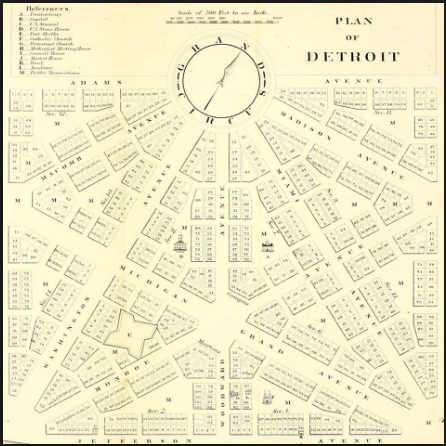 A part of Augustus Woodward‘s plan to rebuild the city after the fire of 1805, the city established the park in 1850. Woodward’s original plan called for the park to be a full circle, but after construction began, property owners north of Adams Street were reluctant to sell due to rising land values.[4] The Detroit Opera House overlooks the eastern edge of the park and the grounds include statuary and large fountains. Near this historic site, General George Armstrong Custer delivered a eulogy for thousands gathered to mourn the death of President Abraham Lincoln. Architect Henry Bacon designed the Russell Alger Memorial Fountain (1921) in Grand Circus Park. Bacon’s other projects include the Lincoln Memorial (1915–1922) in Washington, D.C. The fountain contains a classic Roman figure symbolizing Michigan by American sculptor Daniel French who sculpted the figure of Lincoln for the Memorial.[5]

In 1957, the City of Detroit constructed a parking garage under the two halves of the park.[6] The eastern portion houses space for 250 cars and the western portion accommodates 540.[7]

The half-moon shaped park is divided down its center by Woodward Avenue, the city’s main thoroughfare. The Alger Fountain anchors the eastern half and is capped on its north western edge with a statue of mayor William Cotter Maybury. Its western half is anchored by the Edison Fountain and capped on its north eastern edge with a statue of mayor Hazen Pingree.

The Maybury and Pingree monuments have been relocated several times. The Pingree statue was erected in 1904 near Woodward and Park Avenues facing south,[8] while his rival, Maybury, occupied a site in the eastern half of the park facing Pingree across Woodward Avenue. After the 1957 garage construction, Pingree was returned to his original site while Maybury was placed at the north boundary of the park with his back to his foe. In the 1990s, both statues moved once again to their current locations.

Among the notable buildings encircling the park are the David Broderick Tower and David Whitney Building on the south, Kales Building, and Central United Methodist Church on the north, and Comerica Park and Detroit Opera House on the East.