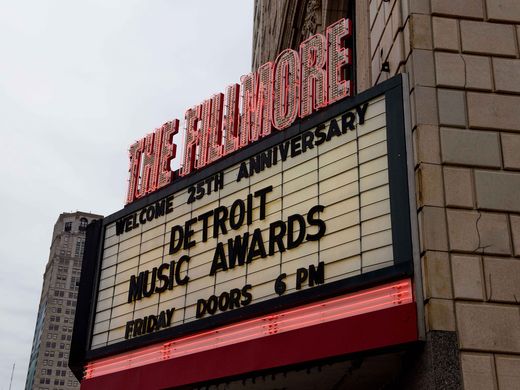 It’s a question that’s been asked for years by locals and visitors, perplexed that a place widely regarded as one of the world’s historical music capitals does so little to officially celebrate it.

Now a high-powered new organization is ready to get the ball rolling, with plans to step up the branding of Detroit as a music center and ultimately construct a downtown museum spotlighting the region’s musical history.

The nonprofit organization doesn’t have a public name yet. No detailed blueprint or budget is set. But with fund-raising efforts set to kick off, the project was unveiled onstage during Friday night’s Detroit Music Awards at the Fillmore Detroit by group founder and entertainment attorney Howard Hertz. Hertz’ announcement to a theater of music professionals was intended to spark momentum for the budding project.

They’ll be seeking millions of dollars from Detroit corporations and philanthropists. If all unfolds as hoped, a museum would be in place within two to four years, likely within an existing downtown structure, Hertz said. Exhibits and memorabilia would highlight Detroit music and artists — Motown, rock, jazz, techno, hip-hop — alongside a performance space and recording studio.

“We’ve had enough interest already from (potential) partners, sponsors and foundations that I’m confident we can raise the funds,” Hertz said.

Unlike cities such as Nashville and New Orleans, which play up their pivotal roles in American music, Detroit has long neglected what should be one of its prime calling cards, said Brian Pastoria, part of the group’s executive board.

As an entrepreneur and onetime drummer with bands such as Adrenalin and DC Drive, Pastoria said he gets a common response when mentioning Detroit during his international travels.

“They don’t say, ‘Oh, the Motor City.’ They say, ‘Oh, man — Aretha Franklin, Stevie Wonder, Bob Seger, Eminem!'” he recounted. “Then I get back home and think, OK, so where is all this? Why don’t we celebrate our musical heritage? It’s such a simple thing to do.”

The group is the brainchild of Hertz, whose clients have included homegrown stars such as Eminem, George Clinton and Jack White. He’s also president of the Detroit Music Awards Foundation, which stages the annual Fillmore event and related activities.

Friday’s announcement follows more than a year of behind-the-scenes groundwork, including scouting of potential museum sites and meetings with Detroit power players. A California firm has been enlisted for preliminary exhibit and design concepts.

“With everything going on in Detroit now, all the positive energy, I thought the time was right to jump in with both feet and make it happen,” Hertz said.

Hertz said his group is seeking “a coalition of the entire city — business, music, government, philanthropy,” he said. Friday’s music-awards ceremony “was a good opportunity to publicly announce that we’re working on this, because we’re already getting calls about it.”

Hertz and Pastoria are joined on the executive board by filmmaker Christos Moisides and restaurateur Adrian Tonon, with other business, media and music figures making up the organization’s overall board.

They’ll be guided in part by “The Mastering of a Music City,” a comprehensive report released last year by two trade groups, the International Federation of the Phonographic Industry and Music Canada. The report, rolled out at last summer’s Midem music-industry conference in France, advises municipalities that want to foster dynamic music scenes while leveraging their musical histories.

The study recommends that local governments appoint a “music officer” to act as liaison to a music commission such as the Detroit group announced Friday. The organization plans to lobby Detroit City Council and Mayor Mike Duggan to create such a position.

The group is also working to secure participation from Detroit’s automakers and other heavy hitters, pressing the case that a thriving music environment is healthy for all.

“That’s the beauty of what we’re doing: Music is the unifying factor,” said Pastoria. “It’s something everybody can get behind, because it benefits everybody’s business.”

While a historical museum is the big end game, Hertz and his partners say their overall initiative is broad and contemporary. Proprietors in Midtown and downtown will be encouraged to fill their establishments with local music, for instance, while bigger venues will be pushed to include Detroit talent as openers for national touring acts.

The group also aims to tackle smaller but crucial tasks — from parking arrangements to signage — that could help streamline the Detroit music experience.

“It’s all overdue,” said Pastoria. “This is such a powerful, obvious thing we’re missing here.”