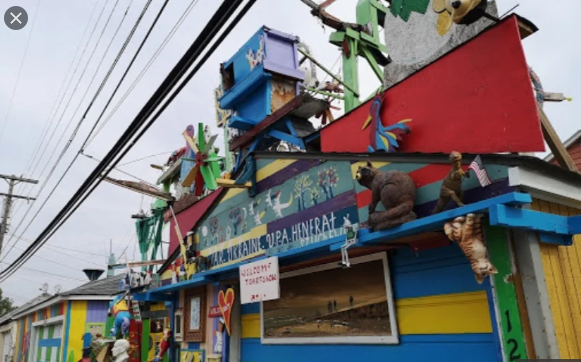 We all need a little bit of quirky in our lives. Sometimes the quirkiness that spices up an ordinary day comes from the most unexpected of places. Hamtramck Disneyland near Detroit might be considered a tourist trap although admission is free and may be even a bit strange, but one thing is for certain. It’s a colorful destination that’s worth a visit – at least once. (Chances are you’ll go back again.)

Just about 15 minutes from downtown Detroit, Hamtramck Disneyland is a fun destination for the whole family. (It won’t eat into too much of your day either.)

Dmytro Szylak, a Ukrainian immigrant who moved to Michigan and worked for General Motors for decades, transformed the roofs of two garages he owned into a virtual Disneyland of artwork.

He began his mission in the 1980s and would continue working on it, adding to it and changing it, until he passed away in 2015. His colorful artwork has drawn countless fans and curiosity seekers from around the U.S. and the world.

Source: Hamtramck Disneyland Near Detroit Is A Must Visit, Quirky Destination