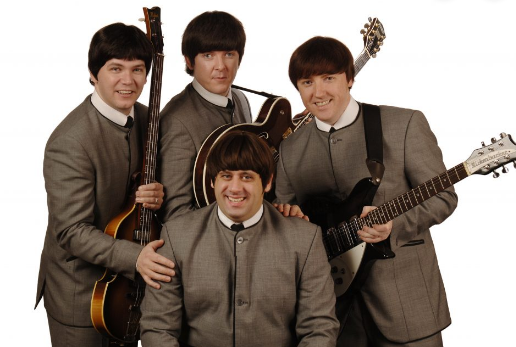 The Mersey Beatles, an all-Liverpool-born Beatles tribute band and the house band for over 10 years at the world-famous Cavern Club, will return to Village Theater this October. The show will take place Friday, October 18th at 7:00 p.m. Celebrating the 50th Anniversary of Abbey Road, the band will play the entire album live followed by a set of greatest hits.

Julia Baird, John Lennon’s sister and the Director of the Cavern Club, will be in attendance selling and signing copies of her book Imagine This: Growing Up with My Brother John Lennon at the general merchandise table before, during and after the show. She says, “The Mersey Beatles have been playing the Cavern Club for over 15 years and are one of the best you will see!”

The Mersey Beatles are no ordinary tribute band. The lads grew up as childhood and schoolmate friends, just like the Beatles! They are the official Beatles tribute band representing the City of Liverpool and for over a decade, were the resident tribute band at The Cavern Club, the nightclub in Liverpool, England, where The Beatles perfected their act before launching a global rock music revolution in the 1960s.

Since 1999, the band has played sell-out shows in more than 20 countries, recreating the Beatles’ most popular hits. The show spans the Fab Four’s entire catalogue, and with four costume changes and authentic Liverpool accents, wit and charm. The Mersey Beatles recreate the Beatles’ sound and image with amazing accuracy using replica Hofner, Rickenbacker and Gretsch guitars and VOX and Ludwig gear.

To purchase tickets ($17 – $45 VIP, including premium seating, a Meet & Greet with Julia Baird and the band, and a CD download) visit cantonvillagetheater.org. Village Theater is an all-ages venue and is located at 50400 Cherry Hill Rd, Canton, MI 48188.