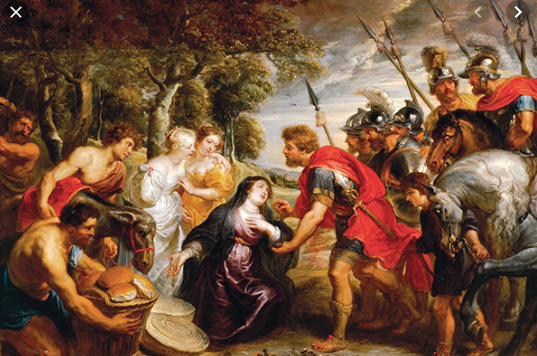 Hundreds of Girl Scouts from across Metro Detroit will embark on an interfaith scavenger hunt Jan. 26 at the Detroit Institute of the Arts as they recognize symbols and stories of the world’s five major faiths. The hunt is one component of a day-long program, part of a long-standing peace initiative called “Reuniting the Children of Abraham.”

Launched in 2004 by interfaith activist Brenda Naomi Rosenberg of Bloomfield Hills, the initiative is aimed at building bridges between children of different faiths.

The program was subsidized by donations made to the Girl Scouts of Greater Southeast Michigan (GSGSEM) and made possible from funding secured by a tri-county millage.

Jason Gillespie, director of education programs at the DIA, helped craft the treasure hunt with gallery educators. He said the scouts will use the mobile scavenger hunt app GooseChase to take them on this special self-guided tour of the museum.

“As evidenced from the first thousand years of human civilization, art and religion go hand-in-hand,” Gillespie said. “The DIA is a natural place to explore and learn about different cultures and religions through representative works of art. The more you learn about other cultures, the more tolerant you become by understanding the history of the religions and how they connect.”

Rosenberg is a woman of many firsts. She was the the first woman vice president of Hudson’s department store. In 2002, she was the first to deliver a sermon at a mosque, Dearborn’s Islamic House of Wisdom, during Ramadan.

In her childhood, Rosenberg, a member of Temple Israel, now in West Bloomfield, said she earned enough Scouting badges to fill two sashes. Now, as the Jewish liaison for the GSSEM, she is often the first Jewish person many Scouts in predominantly Muslim and Christian areas may meet. During her visits to troops in Dearborn and Rochester, she may teach children how to braid a challah or sing a simple Hebrew song.

Rosenberg believes that more than ever before, visits to the DIA can help children confront misconceptions of different religions to offset prejudice.

“I remember after a (childhood) visit to the DIA, I just wanted to travel to France and Africa and all the places I learned about through the art,” said Rosenberg, who also served on the board of the museum.

“I have given talks about Judaism to children in Rochester who said they had never met a Jewish person before. To this day, I have Christian children telling me they learned in their church that Jews killed Jesus. Clearly, there is still much work to be done to take children who may live isolated from one another and bring them together to promote peace.”

After Scouts complete their hunt and receive their special event badges, they will watch the award-winning 2004 project and documentary Reuniting the Children of Abraham. The documentary is the result of collaborative work embarked upon by Rosenberg, the Mosaic Youth Theater of Detroit, Imam Abdullah El-Amin, executive director of the Council of Islamic Organizations of Michigan, and Ann Arbor playwright Rachel Urist.

Suzanne Bante, chair of the Religious Relationship Committee for GSSEM, said part of the Scouting mission is to teach young women how to function in the global community. Bante said 120 girls and family members will explore art that represents Judaism, Christianity, Islam, Hinduism and Buddhism as well as art and artifacts from indigenous African tribal cultures.

In other events that teach tolerance, the Scouts participated in an event called Anne Frank’s Door at the Holocaust Memorial Center in Farmington Hills.

“Part of that mission is accomplished from developing an understanding and an appreciation of religious and cultural differences,” Bante said.

“This unique DIA program gives our Scouts the opportunity to examine these differences and expose them to the fine arts in a beautiful, non-threatening setting. Plus, the hunt will be lots of fun.”