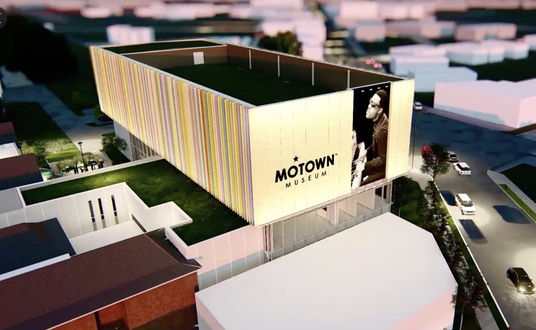 Three years after the Motown Museum launched its $50 million transformation, you can at last get a full look at the planned expansion of the historic Detroit site.

An architectural flyover animation released today is a journey around the finished complex — a bright, bird’s-eye view of a project that will remake the West Grand Boulevard neighborhood where homegrown artists such as Diana Ross and Stevie Wonder became stars.

A handful of renderings have been released since the museum announced its expansion plans in late 2016 and broke ground last fall. But the video gives the first full, sweeping view of the charted 50,000-square-foot project — and shows how the landmark Hitsville, U.S.A., house will fit into the bigger installation.

It also offers an overhead look at the planned structure that will house new exhibit space, with colorful façades designed to look like the spines of vinyl albums.

The clip was first screened publicly during Motown 60 festivities at Orchestra Hall on Sept. 22, hours after the museum hosted an array of dignitaries to break ground on the first of four construction phases.

Officials also revealed that day that the museum had crossed the halfway mark in its ongoing $50 million fundraising campaign.