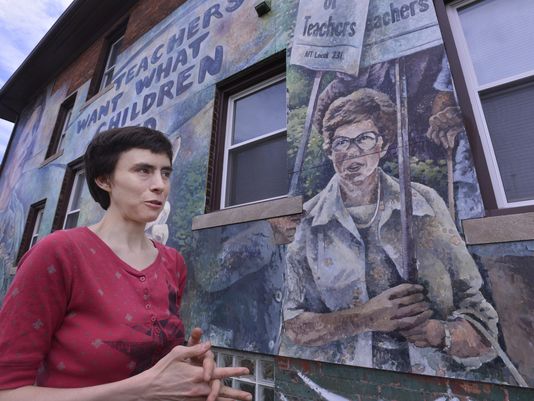 Artist Nicole MacDonald enjoys seeing her work in galleries — and she’s been in plenty of them from Detroit to the Netherlands. Seeing her paintings grace the boarded up windows of Big B Liquor Party Store is quite another experience.

MacDonald prefers the Detroit party store. Or the abandoned warehouse on Grand River. Or the renovated house in North Corktown, to name a few of Detroit places where her paintings hang for anyone to see.

“A liquor store is a whole different echelon, people day and night. It’s free,” MacDonald said. “I really like that accessibility.”

MacDonald’s public art is serving an important new purpose, her patrons contend. Her big, loving portraits of Detroit people and places serve as a bridge between old and new residents, preserving local history at a time of growing concerns about gentrification.

Big B Liquor is on the corner of Trumbull and the Interstate 94 service drive on the edge of Wayne State University’s Tom Adams Field. It’s in Woodbridge, one of the many parts of Detroit that’s been MacDonald’s muse for decades. Her party store paintings are celebratory, larger-than-life portraits of Detroiters past and present. Among the portraits: The musician Sixto Rodriguez, subject of the Oscar-winning documentary “Searching for Sugar Man”; the Pulitzer Prize-winning poet Philip Levine; and Naomi Long Madgett, Detroit high school teacher and founder of Lotus Press.

“I want to show everyday kind of people, people who fought on behalf of their fellow citizens,” MacDonald said. “A liquor store is more appropriate than a gallery for that.”

The Motor City has inspired MacDonald, 37, for a long time. It inspired the native Detroiter during the time when empty buildings grew like weeds, just as the people who lived here inspired her with their resiliency.