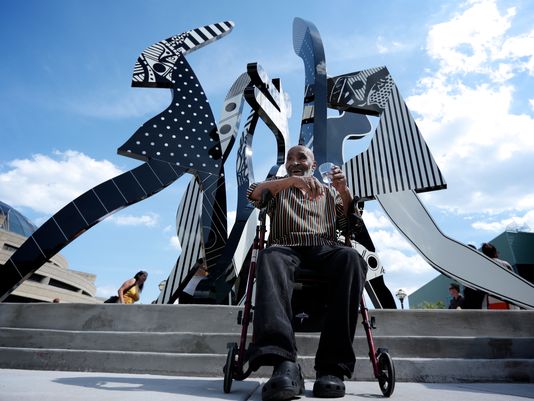 Ever since the Charles H. Wright Museum of African American History opened its doors in Midtown in 1997, the venerable Detroit artist Charles McGee has been eyeing the elevated plaza just to the west of the museum and thinking about what he might create for the space if given the chance.

Last year, the call finally came from the museum in the form of a commission to commemorate the 50th anniversary of the 1967 civil disturbance in Detroit. On Saturday, the 91-year-old McGee, the dean of Detroit’s visual arts scene, saw his latest work, a 20-foot-by-20-foot abstract sculpture called “United We Stand,” unveiled on the museum’s plaza under the blazing afternoon sun in front of hundreds of cheering onlookers.

The exuberant sculpture explodes with the optimism of a jazz band stomping the blues. Seven soaring and elegant figures jitterbug together in an improvised dance of universal connection and community. Made from polychrome steel and painted with syncopated black-and-white geometric patterns and shapes, the figures stand for a multicultural Detroit and, by extension, America. At a time when contemporary politics and life appear defined by division, anger and, increasingly, racial violence, McGee’s art offers a way forward.

“My work is about the power of togetherness,” McGee said. “It’s the work of my life, what I think all of my nearly 92 years have been about. Not just ‘United We Stand,’ but all of my work. It’s all connected just like we are all connected. We don’t want to believe that, but we are.”

A number of significant artistic, social and cultural threads came together at Saturday’s celebration. On the one hand, it introduced to Detroit a commanding new sculpture that promises to quickly become a signature piece of public art in Detroit and will stand as a late masterpiece by one of the city’s most beloved, influential and indefatigable artists. Even after a 2011 stroke, he has continued to make vital work.