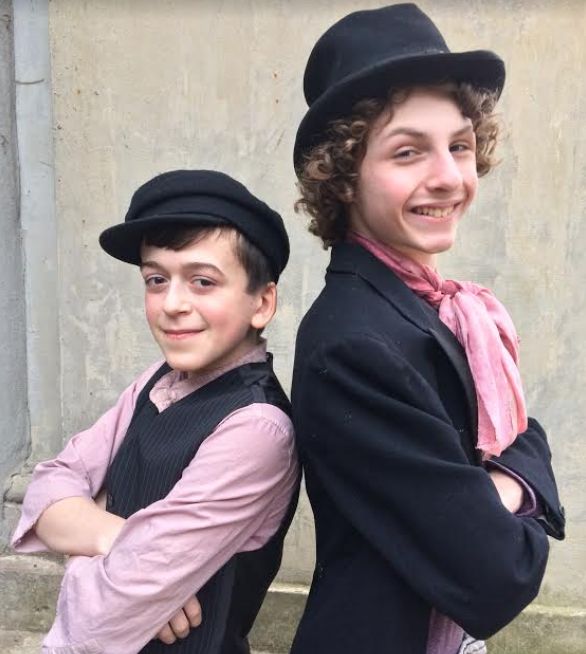 We were invited to a fun evening last Saturday, to an English workhouse/ orphanage, some of the seedier parts of London, a local pub, a posh townhouse in the city’s better area, ending with a bridge over the Thames. This was all staged at the Cranbrook Greek Theater, which was built in 1916, and only one of a handful of such theaters in the United States. This offered a great setting for the performance of the delightful Musical “Oliver!” complete with a cast of both young and adult members. The orchestration and singing were wonderful! For those who don’t know either the story or the songs in this musical, we would encourage you to get to this local production. Charles Dicken’s  “Oliver Twist,” a story about a young, hungry, adventurous orphan boy was done proud by the whole cast. The list of standout performers in this production is sizable, but to mention a few, Mr. and Mrs. Bumble, young Oliver, the Artful Dodger, Fagan, and Nancy, all provided us with some delightful singing and acting.  Thanks to all cast and crew for a great evening.  – Richard and Theresa Dalton

More Information from the St. Dunstan’s Theatre Guild of Cranbrook:

Come experience “theatre under the stars,” as this classic musical will be performed in the beautiful outdoor Greek Theatre, located right behind the St. Dunstan’s pavilion in Bloomfield Hills.

Based on the Charles Dicken’s novel, Oliver Twist, with music and lyrics from Lionel Bart. The streets of Victorian England come to life as Oliver, a malnourished orphan in a workhouse becomes the neglected apprentice of an undertaker. He escapes to London where he is picked up on the street by a boy named the Artful Dodger and welcomed into a gang of child pickpockets led by the conniving Fagin. When Oliver is captured for a theft he did not commit and is rescued by the benevolent victim, Fagin employs Bill Sikes and the warmhearted Nancy to kidnap Oliver back, threatening Oliver’s chances of discovering the true love of a family.

With spirited, timeless songs from this Lionel Bart score like “As Long As He Needs Me”, Food, Glorious Food”, “Where Is Love?”, Oliver! is an extraordinary musical classic.

This show requires “all hands-on deck” from the St. Dunstan’s volunteers. Director, Alan Binkow (Troy) has been a member with St. Dunstan’s since 2015, and he is currently President of the Guild. Binkow has enjoyed his time on stage and behind the scenes, but is excited to go through this journey as Director of Oliver, “I’ve loved this musical since I sang along to the cast album as a little kid. To be able to direct it now, with this amazing cast and crew…it’s a phenomenal experience.”