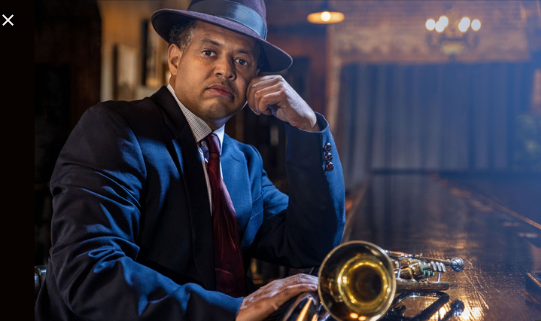 When Silver, played by Andrea Patterson, swaggers and struts her way into The Paradise Club in the Black Bottom section of Detroit in Dominique Morriseau’s Paradise Blue, we could get the idea pretty quick that she is the one who is going to bring trouble to the story.

After all, the story starts with some strains from the trumpet of our title character, Blue (Brian Marable), followed by a gunshot. Then, as the story unfolds as a lookback, we are left to wonder who just got shot. When Silver arrives, it is reminiscent of Bernard Malamud’s “Memo” in The Natural: Beautiful, dangerously “hippsy” in her walk and seemingly the perfect woman to have something to do with an unwelcome gunshot.

But not everyone is what they seem in Black Bottom.

Morriseau has written a trilogy of plays about Detroit–Detroit ’67, Skeleton Crew and Paradise Blue. The Detroit Public Theatre, on whose artistic board Morriseau sits, has produced all three now.

This one, set in 1949, captures the flavor of a vibrant black music culture in a section of Detroit that stretched from the Detroit River North to Grand Boulevard. The year of our story comes following the election of Albert Cobo to the Detroit Mayor’s mansion. Cobo had been City Treasurer since the Depression years, and ran on a platform of keeping black residents from “invading” white neighborhoods. He was very much the Trump of his day.

He engineered a public housing policy designed to keep black families bottled up in a few neighborhoods. And in what became a successful attempt to clear out Black Bottom and the “Paradise Valley” sections he was eyeballing for development, including the construction of Lafayette Park, hotels and office buildings, he offered owners of black-owned businesses like Blue’s club, and many more like it, $10,000 to clear out.