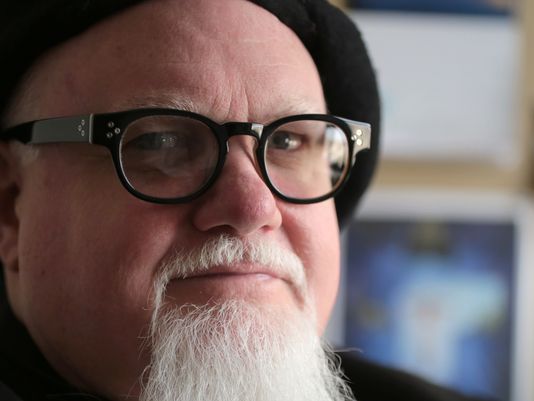 What is poet M.L. Liebler like? He’s not easy to sum up quickly, but his prodigious white ponytail of a beard, Buddha frame and a pate topped by a bebop beret or porkpie hat point you in the right direction.

Yeah, he’s a character, with little about him that comes from central casting. Take this excerpt from a recent e-mail: “I’m one of those weird artists and professors who actually believes in God,” Liebler wrote. “I know, it’s crazy.”

At 62, Liebler is the bard of Detroit, an indefatigable champion of the city’s literary scene and a longtime and beloved teacher at Wayne State University. Born in St. Clair Shores, Liebler embodies the working-class soul of Detroit. He writes from the perspective of the common man — an uncommonly perspicacious common man. He celebrates the nobility of the union worker, the virtues of old-fashioned liberal politics, the love and safety of family, the wisdom of musical influences like John Lennon, the enduring shadows of childhood memories and wonders of faith. Eschewing dense language and brow-beating polemics, he relies on everyday vocabulary, rhythm, a sharp eye and ear for telling detail and welcome wit.

Liebler has got a lot going on at the moment. His latest book of poems, “I Want to Be Once,” was published earlier this month by Wayne State University Press. Meanwhile, Liebler has co-edited “Bob Seger’s House and Other Stories,” a new collection of short stories by Michigan authors published as part of the 10th anniversary celebration of WSU’s Made in Michigan Writers Series. On yet another front, Liebler has edited an anthology of writing about Detroit music, “Heaven Was Detroit,” to be published later this year by WSU.

Liebler recently spoke in his Wayne State office about the power of poetry, his own work and creative process and favorite poets.