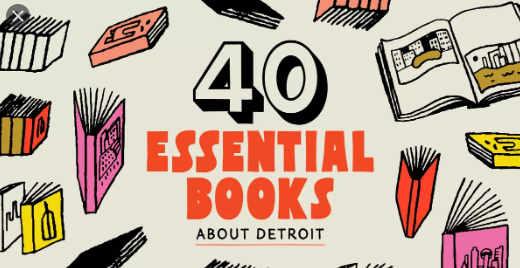 Detroit is one of the those cities that demands to be written about. Whether cataloguing its impressive buildings, impactful socio-political movements, or the cautionary tale of its economic decline, there’s no end of material.

But nonetheless, we took on the task of identifying the 40 essential books about Detroit—the works that provide a starting point for anyone who wants to understand how Detroit became Detroit. While resulting list is not comprehensive, it is diverse, with fiction, non-fiction, and ones heavy on illustration. We hope you enjoy—and if your favorite is not on the list, chime in with your picks in the comments.

And a couple more things to note: We chose books that were about or feature Detroit, but not necessarily those written by a Detroit author. We also mention options for further reading of books by the same author or on a very similar topic. Also, books are separated by theme, but are otherwise in no particular order.

Lastly, we’ve linked mainly to Amazon out of convenience, but we of course recommend seeking these out at one of Detroit’s amazing independent and used bookstores: Source Booksellers, John K. King, Pages Bookshop, Book Suey, and Book Beat to name a few.

The Dawn of Detroit by Tiya Miles

A book chronicling the fascinating and disturbing history of slavery in early Detroit. Miles delves in detail into why and how many slaves were owned by the city’s elite, relationships between the races, and individual stories about freed and enslaved people.

Detroit: I Do Mind Dying by Dan Georgakas and Marvin Surkin

This engrossing book covers the little-known history of the radical labor movement and its Detroit origins in the 1960s and 70s.

Terror in the City of Champions by Tom Stanton

A striking portrait of Depression-era Detroit. As the Detroit Tigers were once again becoming a championship baseball team under manager Mickey Cochrane, a dark undercurrent swept the city in the form of a Klan-esque secret society.

The Dollmaker by Harriette Arnow

An epic novel (690 pages) about a Kentucky family that migrates to Detroit at the promise of employment in the automobile industry. The Guardian calls it “a terrifying lesson in US history—and a haunting tragedy.”

This Is Detroit by Arthur M. Woodford

A sweeping but brisk history of Detroit, beginning with its founding by Cadillac through the year 2001 when it was published.

Freer: A Legacy of Art by Thomas Lawton and Linda Merrill

A biography of the industrialist Charles Lang Freer, who spent much of his life in Detroit. One of the renowned art collectors of his time, he brought James McNeill Whistler to prominence and a heightened awareness to east Asian art. His gorgeous Detroit mansion still stands, but his extensive collection lives in D.C. at the Smithsonian Institution that he helped found.

The Origins of the Urban Crisis by Thomas J. Sugrue

Also for history nerds, this book is essential reading for understanding Detroit’s present racial and economic dynamics. Sugrue brings forth historical facts and figures to show why—through housing, employment, other forms of discrimination—Detroit became a place of profound inequity.

A book written specifically for newbies. Published in 2015 at the height of Detroit’s gentrification, Foley provides guidelines to newcomers, in biting and hilarious prose, on a variety of subjects, such as how not to offend people, how to party, and how to be white.
(Further reading: The Detroit Neighborhood Guidebook by Aaron Foley)

Detroit City Is the Place to Be: The Afterlife of an American Metropolis by Mark Binelli

Binelli, a journalist who grew up in Metro Detroit, looks to discover “what happens to a once-great place after it has been used up and discarded.” The hopeful (though at times skeptical) book looks back on the city’s past, but mostly to its future through people-centric stories.