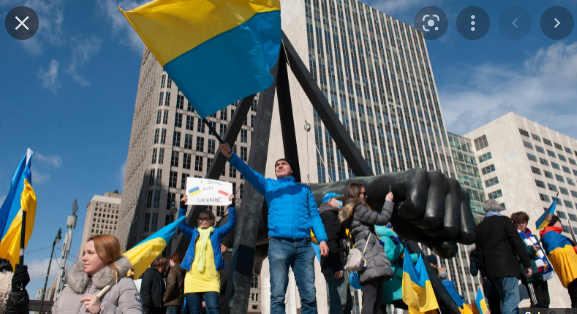 As Russia continued its bloody assault on Ukraine on Sunday, local Ukrainians and Ukraine supporters flooded Detroit’s Hart Plaza and surrounding streets to condemn the aggression.

The densely packed crowd at the Stand With Ukraine rally overflowed the plaza, moving from Woodward Avenue to Campus Martius park.

Protesters waved blue and yellow Ukrainian flags, and carried banners and protest signs. “Ukraine is not yet lost,” the national anthem of Ukraine, blasted from cars and boomboxes.

“That means ‘Glory to Ukraine,’ and we are answering ‘Glory to the heroes! ‘” said the mother, who said Victoria was a year-and-a-half old when the family immigrated to the U.S. for jobs.