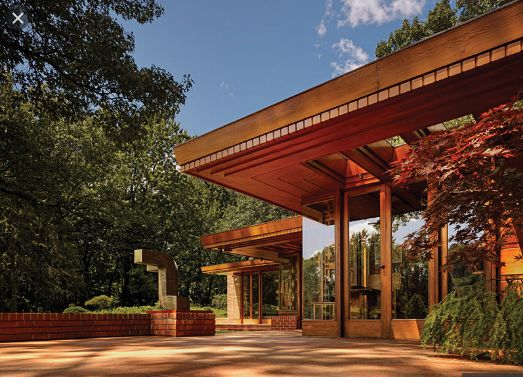 One doesn’t have to go far in metro Detroit to find some of the most beautiful examples of Midcentury Modern design, whether they be renovated homes, collected furnishings, or intriguing museum exhibits and tours.

“There’s so much modern history here because of Cranbrook Academy of Art, CCS [College for Creative Studies], and other venues,” says Tom Gibbs, owner of Midcentury emporium Tom Gibbs Studio in Ferndale. “Designers like Eames, Bertoia, the Saarinens — these are the folks who shaped the face of American Midcentury design. It’s a never-ending piece of Michigan history, how all these icons are connected.”

He’s referring to design greats including married couple Charles and Ray Eames — who studied at Cranbrook Academy of Art in Bloomfield Hills — famous for their iconic Eames Lounge Chair and Ottoman, among other designs. Harry Bertoia attended both CCS and Cranbrook. His famous diamond chair was a sculptural piece of art made from a welded lattice of steel. Architect/designer Eliel Saarinen designed the campus of Cranbrook Educational Community, where he taught and became president of the Cranbrook Academy of Art. His son, Eero, taught courses in sculpture and furniture design at Cranbrook and turned out such designs as the famous Tulip and Womb chairs.

Local art historian Deborah Lubera Kawsky, whose specialty is Midcentury Modern design, explains that the term denotes a time ranging from the late 1930s to the late 1960s. It has come to evoke both the style and the spirit of that era.

“It encompasses clean lines, free-flowing spaces, built-in furnishings, and a bold color palette,” Kawsky says. It’s also a recognition of the power of design — facilitated by then-new technologies such as Thermopane glass, fiberglass, and Formica — to enhance modern living in the post-War era.

Source: Your Guide to Midcentury Modern Design in Metro Detroit