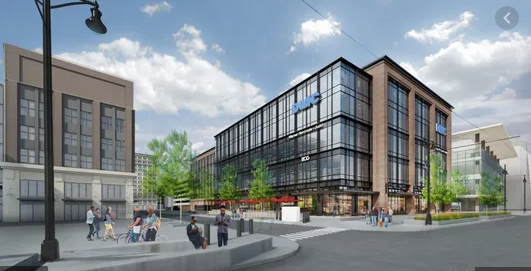 Boston Consulting Group plans to close its Troy office and relocate to Detroit in a new building that is now under construction next to Little Caesars Arena.

The global consulting firm will be one of three tenants in the five-story, $70-million building, 2715 Woodward, joining the Detroit Medical Center and law firm Warner Norcross and Judd.

The plans were announced Monday by the Ilitch organization, which is developing the building. Construction began in the spring and is expected to finish in early 2021.

Boston Consulting plans to vacate its Troy office at 201 West Big Beaver in the first quarter of 2021, and move all 100 employees to Detroit.

“Moving into Detroit connects us with our clients on a whole new level,” Michelle Andersen, managing director of the firm’s Detroit office, said in a statement. “Our staff is thrilled to be part of the energy in Detroit, and ready for the expanded opportunities to find new sources of value creation for our clients and new chances for expanding the knowledge base of our team.”

Boston Consulting plans to occupy 30,000 square-feet of the new building. The DMC will use the building for its new sports medicine center. The building also neighbors the recently opened Wayne State University Mike Ilitch School of Business.

The arena district has been gaining high-profile office tenants, even as it prepares for the April closing of Kid Rock’s Made in Detroit restaurant.

Tech giant Google said earlier this year that it plans to expand and lease an additional floor at its arena location in 2020.