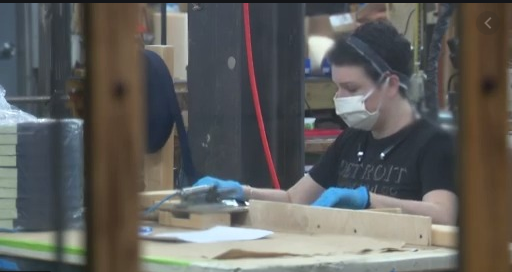 A couple of Detroit companies are teaming up, shifting operations to make needed supplies — not unlike what companies did during World War II.

“We’re making as many as we can – as fast as we can,” Eric Yelsma said.

Yelsma and Brenna Lane own Detroit Denim Company – a business in the midst of this coronavirus crisis that seemed non-essential until now. They’re not making jeans, they’re making face shields.

Partnering with Pingree Detroit and others they’ve shifted their entire operations to fight COVID-19.

“We’re making about a thousand of these face shields a day so from footwear to face shields we’re really – we’re doing our very best,” said Jarret Schlaff, co-founder and CEO of Pingree Mfg.

“This is part of the personal protective equipment that our staff drastically are needing so we’re really honored to play a role in supporting our frontline healthcare workers,” Schlaff said.

“This week it’s face shields, next week we’ll be making gowns and masks through ISAIC — the Industrial Sewing and Innovation Center — the entire sewing and making community in Detroit has really come together,” Brenna said.

It’s reminiscent of Detroit’s place in history during World War II, when we went from assembly lines that built automobiles to building airplanes — the bombers that helped win the war.

“It kind of goes back to that arsenal of democracy of like – switch what you’re doing – pivot immediately to what’s needed,” Eric said.