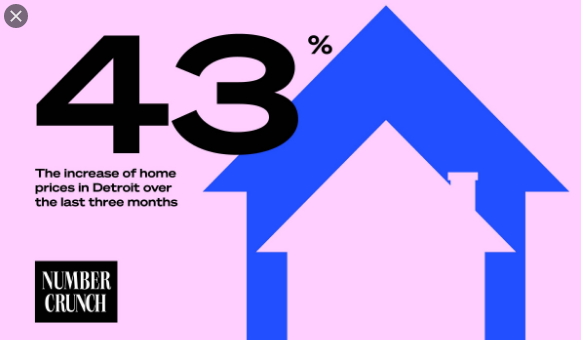 43%: That’s the increase in home prices in Detroit’s urban neighborhoods over the past three months—nearly four times the rate of less densely populated areas, according to an analysis of Redfin data by Bloomberg Businessweek. The urban housing market is booming nationwide, with prices rising 15% in the same time period. Real estate prices in densely populated areas are rising slightly faster than those in suburbia.

That’s a shift from between May and December of last year, when urban home prices were consistently lagging behind their suburban counterparts as many Americans deserted cities with a high cost of living, like San Francisco, Manhattan, and Boston, for places with more space.

Enter more affordable cities like Detroit, Louisville, Baltimore, and Boise—cities that aren’t necessarily booming tech hubs but cost less and still boast cultural amenities. Realtors and experts point to the urban real estate rebound as a hopeful indicator that consumers are anticipating the return of nightlife and city living in a post-pandemic world.

Source: Detroit Housing Prices Are Soaring During the Pandemic | Marker