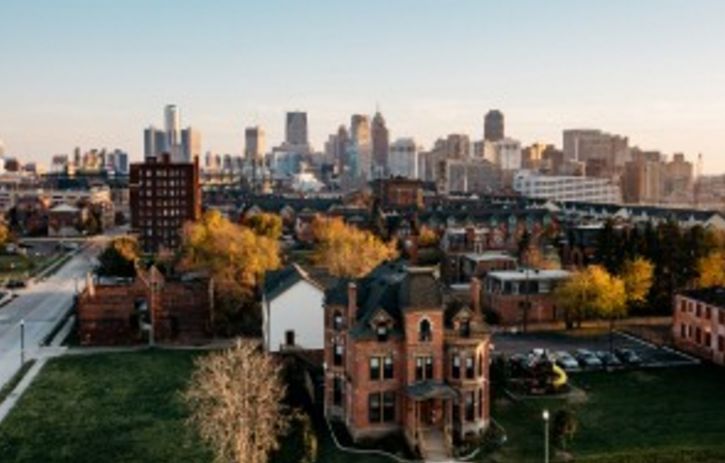 Detroit’s historic Brush Park neighborhood.On a recent drive through Detroit’s Brush Park, Melissa Dittmer paused to consider the expectations of a city whose spirit had been beaten down by decades of decay and abandonment.

“Many Detroiters for so long have not seen progress, so they just want to see something,” said Dittmer, the director of architecture and design for Bedrock, the real estate company owned by billionaire Dan Gilbert. “What we have tried to do is say something is not enough. We need to do something spectacular.”

Dittmer was talking about plans to transform an 8.4-acre section of Brush Park, once home to the city’s elite before being all but abandoned in Detroit’s decline, into a new neighborhood with a fresh mix of architecture. But she might as well have been summarizing the challenge facing Gilbert, her boss, who has been alternately referred to as Detroit’s downtown savior and as a con artist who got rich issuing bad mortgages.

While bureaucracy slows residential development in many other cities, Detroit is moving at historic hyperspeed to increase available housing in a downtown where 100,000 people work but less than 6,000 people live.

Detroit has been through a lot: The Great Depression, the decline of the U.S. auto industry, white flight, and bankruptcy have all humbled the city. Today the downtown still feels hollowed out, and it is fairly desolate on weekdays. Many of the thickly built towers designed in Art Deco and Beaux Arts style by Louis Kamper, Donaldson and Meier, and Albert Kahn sit vacant like an early 20th century architectural graveyard. 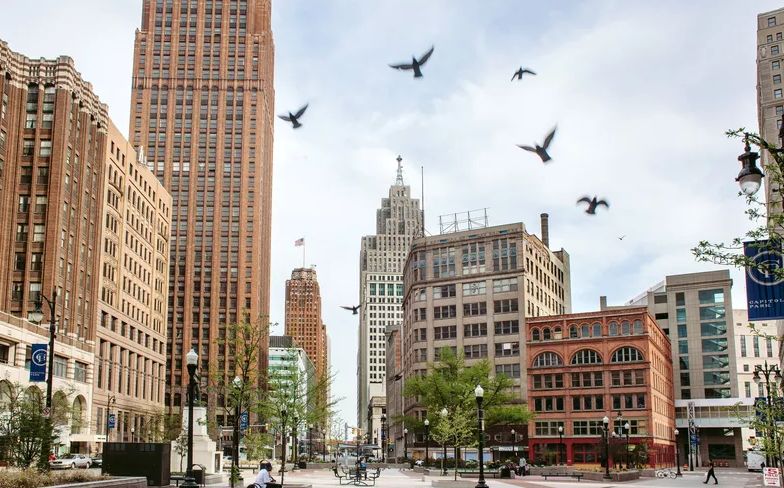 Capitol Park in downtown Detroit is surrounded by historic buildings, including the Detroit Savings Bank Building, Albert Kahn’s eponymous The Albert, and the David Stott Building.

A lack of downtown housing is part of what’s holding the area back. Residential occupancy is at 98 percent. One study showed that Detroit should be able to absorb 5,000 units in the first five years after the 2013 bankruptcy. Bedrock has challenged that estimate, believing the city could absorb closer to 7,000 units. (From 1999 to 2009, Detroit added no residential units. Since the beginning of 2015, the city has added more than 1,000.)

Two billionaire families have carried Detroit into a construction and real estate development spree. Mike Ilitch, owner of the Little Caesars Pizza chain and two of the city’s sports franchises, and Gilbert, a 54-year-old Detroit native, are making multi-billion-dollar investments in a two-square-mile swath of the city’s downtown.

After re-locating his umbrella company Rock Ventures, which includes Quicken Loans, to downtown Detroit in 2010, Gilbert went on a buying spree, scooping up more than 90 buildings and parking structures, most of them in the central business district. He is using some of the structures to expand his corporate campus (Quicken Loans and Rock Ventures have more than 15,000 employees), while hatching plans for others to be converted into mixed-use buildings with plenty of housing units.

On a drive through the central business district, Dittmer pointed out several of Gilbert’s acquisitions. There was the Book Tower, a 38-story structure built in 1926 and designed by the architect Louis Kamper. Adjoining it are two stories of what would have been an 81-story companion tower. That project was abandoned when the Depression hit and remains unfinished. Book Tower is currently vacant, butrestoration work began earlier this month.

Then we passed the 35-story David Stott building, an Art Deco structure opened in 1929 with curved windows on the third floor. It’s also abandoned. Bedrock is looking to convert it to a mixed-use residential and commercial development.

“A lot of our buildings’ history have that similar narrative,” Dittmer said. “Everything opened in the grandeur and opulence of the time and then we hit the Great Depression.”

That Gilbert, who made his fortune by creating the Internet mortgage lender Quicken Loans, is doing so much in real estate development, so quickly, has given long-time developers “a lot of pause,” said Eric Larson, chief executive of the Downtown Detroit Partnership. “Gilbert is not from the development world,” Larson said. “Dan is a quick study. But one of the challenges with a quick study is you are learning as opposed to having learned. Detroit has become a bit of a blank canvas for this personal exploration of his.”

Some in the community have also chafed at the power Gilbert is amassing, questioning whether his investments so far are unduly favoring corporations and new downtown residents. And Gilbert’s extensive downtown surveillance system has made some civil liberties groups nervous.

As Larson sees it, Gilbert “first and foremost wants his legacy to be about how he has helped transform the city. Secondary are the real estate fundamentals.”

To buoy his point, Larson pointed to the “artificial” rise in downtown commercial rates, which have climbed from $8 to $12 per square foot to as high as the low thirties per square foot. Part of the increase, Larson argued, was because Gilbert has bought a lot of real estate, put his own entities in the structures and then charged a rate that “is necessary to support the level of investment he has made.”

Larson, who co-managed Bedrock for Gilbert for a year before leaving in 2014, said the rental-price boost reflected Gilbert’s “ability to take money out of one pocket and put it in the other pocket.”

Gilbert declined to be interviewed for this column. In response, Dan Mullen, executive vice president for Bedrock Detroit, said 66 percent of the office space of Gilbert-owned buildings in Detroit are being occupied by companies unrelated to Gilbert. Mullen said the strong interest from companies wanting to locate downtown “has caused a natural progression” in the commercial rates, but that “the rates are consistent across the downtown market.”

While warning signs loom, Gilbert’s bulldog approach to Detroit is getting things done. When Google decided to pass over Detroit for deployment of high-speed Google fiber, a group of Gilbert’s software engineers came to him with the idea of developing their own high-speed internet connection. The new company, Rocket Fiber, now has 32 employees and operates out of one of Gilbert’s buildings.

Gilbert’s plans are not confined to conversions of older towers. Earlier this month Bedrock broke ground on a 13-story building at 28 West Grand River that will house 218 micro-units ranging from 190 square feet to 400 square feet. The development, which is expected to be completed by mid-2017, will target millennials, but also “transient workers,” said Steve Rosenthal, president of Rock Companies, Gilbert’s real estate development arm. “We have people who work in many of our companies that live 60-plus miles away,” he said. “This would certainly be a better place for them.”

Then there is Brush Park. The 150-acre neighborhood, nestled between the central business district and midtown, was home to hundreds of Victorian-style mansions in the late 1800s before falling prey to abandonment and vacancy. Eventually, 90 percent of the homes were demolished, leaving large swaths of vacant land where people park their cars during sporting events.

In Brush Park, Bedrock is converting four historic mansions, each close to 5,000 square feet, into duplexes half that size. I visited one three-bedroom duplex, already renovated for HGTV’s showThe Rehab Addict, where Bedrock modernized the kitchen while retaining the original, sometimes uneven, look of the bricks.

Gilbert also plans to build 405 residential units and 20,000 square feet of retail. About 300 of the units will be rentals, the rest for-sale units; they will range from studios to three-bedrooms. There are also plans to put in a series of carriage houses along the alleys to create a “European street feel,” Dittmer said.

“We wanted to create a community where people could age in place,” she said, with a variety of options for residents to size up or down as they grow older.

Bedrock is looking to expand its Brush Park project and already submitted a bid for another 20 acres of vacant land the city is opening to development. Brush Park happens to be across from a new hockey arena, currently under construction, which is part of District Detroit, a 385-acre development that will be larger than Boston’s Back Bay. The Ilitch family controls most of it. The estimated $1.2 billion public-private investment will include three buildings spanning 200,000 square feet of residential and office space. The project’s first phase—800 to 1,100 housing units, a potential mix of micro-units, condos, and town homes—is planned to be finished with the arena in 2017, said Doug Kuiper, a spokesman for Ilitch Holdings.

It all adds up to a stunning turnaround for a city where downtown living had become a a faded dream. For the immediate future, at least, Gilbert and the Ilitch family will be driving the train. While that may be scary to some, without their ambition and massive investment Detroit would still be a city of abandoned mansions and skyscrapers.

“We became the nation’s underdog,” Larson said. “And we had a couple of individuals that were willing to take a huge bet. That has made all the difference.”