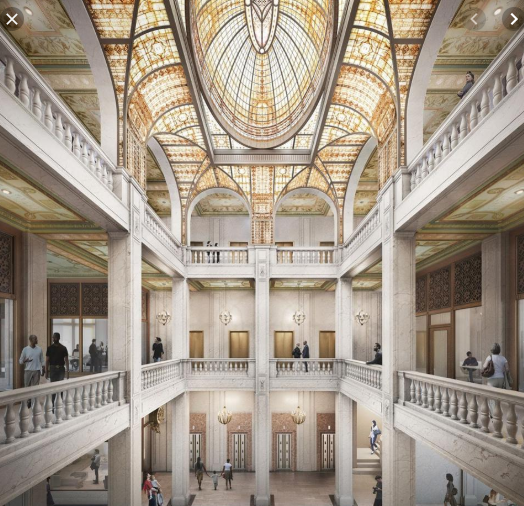 Designed by architect Louis Kemper in 1916, the Book Building required a decade to construct. It opened in 1926, showcased an Academic Classicism architectural style, and at 475 feet tall was the city’s tallest structure until the 47-story Penobscot Building opened two years later. Book Tower would go on serving as a key cog in the downtown Detroit office building scene right into the early 1970s.

Its downturn – starting at about the half century mark of its lifespan – mirrored the city’s own. A series of owners came and went before Bedrock bought the tower in 2015 and proceeded to complete a years-long exterior restoration, including replacement of its ornamental cornice and installation of exactly 2,483 historically-accurate windows.

“Book Tower is one of the most recognizable structures in the Detroit skyline, and was built as an anchor along Washington Boulevard, where its namesake, the Book Brothers, grew up,” says Bedrock Chief Design Officer Melissa Dittmer. “The brothers imagined a building that would endure as a landmark for generations, while serving their community in a range of ways. We are working on carrying out that original vision.”