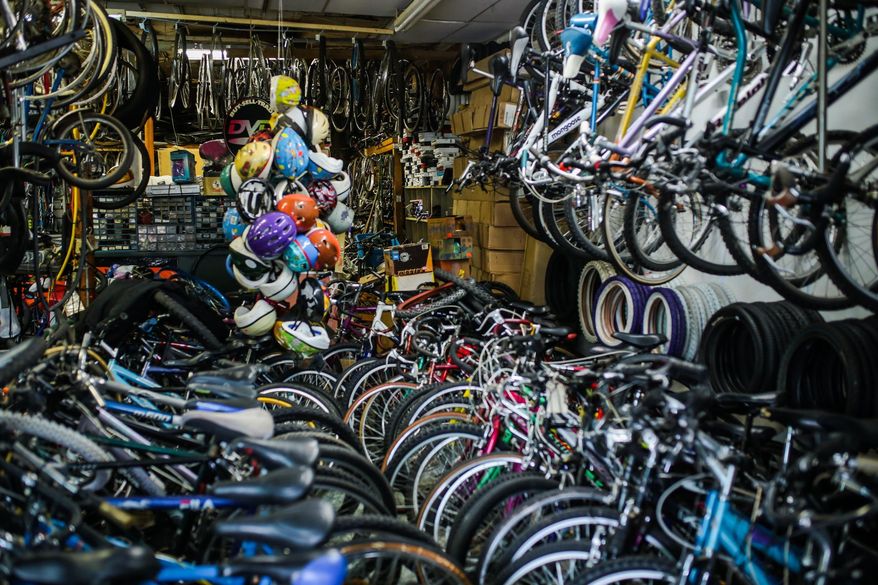 Sam Awada sat at his desk, surrounded by a hurricane of bicycles stacked all around him. His walking cane leaned against the drawers. His .38 revolver was sitting in front of him.

Based on past experience, he felt it was smart to keep it there, the Detroit Free Press reported.

Sam’s the owner of Livernois Bike Shop on Detroit’s west side, the oldest bike store in the city – there since 1938. He sells and repairs not just bikes and bicycle parts, but also offers video games, something he added several years back to get through the lean winter months.

For decades, the shop was owned by his dad, who died not long ago. Now it’s all his.

Sam’s 56, with short gray hair and a square-jawed face. He’s soft-spoken and friendly. His knees have gone bad, so he spends much of the day sitting at the old desk at the back of the dimly lit, bike-crowded shop, greeting whoever makes their way through the plywood front door.

A young man walked in. Sam recognized him from a distance.

“This guy’s always trying to sell something, get a couple of bucks,” Sam whispered. “He’s in the ozone, that kid. Something’s wrong with him.”

Sure enough, the visitor made his way into the store, down the narrow aisle between all the bikes, and toward the desk until intercepted by “Magic,” one of Sam’s employees. The visitor lifted his shirt, reached down into the front of his pants and began pulling something out slowly – an attention-getting gesture.

But it was only another stack of random items he was trying to sell for a buck or two: A Wolverine comic book, a Spider-Man comic book, a cheap key chain with a cartoon figure on it and a free DVD for Geek Squad tech support. He handed the pile to Magic, who brought it back to Sam.

Sam shook his head. “I don’t even know what to do with this,” he said, puzzled. But he did what he always does, pulled out two dollars and told Magic to hand the money to him – and give him back his stuff, too.

The young man wordlessly and thanklessly took the cash, took back his wrinkled comic books and his key chain, and wandered out.

“I’m always trying to help him out,” Sam explained after he’d gone. “Two dollars to him is a lot of money. My dad was like that. He used to help people out. We’ve always done that.”

For some small business owners like Sam, who’ve stayed through the years in some of the city’s rougher neighborhoods, the role of storekeeper has evolved. A guy like him isn’t just a merchant, he’s also a social services agency doing a little of everything – offering counseling and advice, or a place to work, or a handout, or just serving as an unofficial pawn shop.

“There’s a lot of people I see coming in from the street, and they want to make an honest buck, but he (Sam) doesn’t need it from them, he doesn’t buy nothing,” said Majd Maroun, 21, known by everyone as Magic.

“He gives them a dollar or two, looks out for them and just says, ‘Stay out of trouble.’ He’s just trying to help people, help out the community.”

For the whole story, visit: http://www.washingtontimes.com/news/2016/apr/17/detroits-oldest-bike-shop-owner-rides-out-tough-ti/