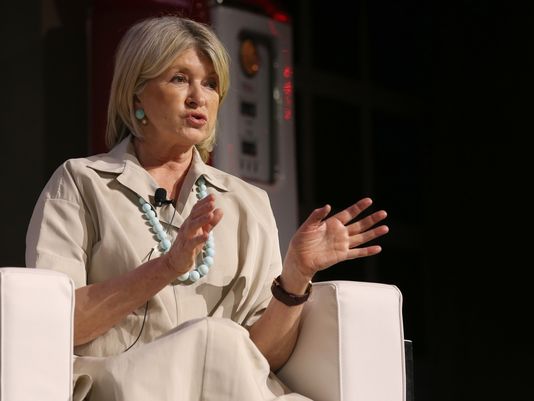 Homemaking guru Martha Stewart shared management and branding secrets Thursday and expressed regret for not buying troubled retailer Kmart as she and other industry leaders and experts took the stage during Fuel Detroit, the one-day leadership and business conference.

Stewart was among the bigger names at the conference, which is in its second year and aimed at imparting leadership skills and career advice. More than 1,300 people bought tickets for the event inside the Sound Board at MotorCity Casino Hotel. Other well-known speakers included Michael Strahan, the television personality and former football player; clothing designer John Varvatos and retired astronaut Capt. Mark Kelly.

Seated beside Devin Scillian of WDIV-Channel 4, Stewart recounted her “fabulous evening” in Detroit on Wednesday, when she met with entrepreneurs at the Ponyride work space, dined at trendy Gold Cash Gold in Corktown – “the food was utterly superb” – and received a Shinola watch.

She considered making a visit to the former and now-vacant Kmart headquarters on Big Beaver Road in Troy, a building she first saw during the 1980s when she signed her first corporate partnership with the retailer. Stewart said she once even mulled buying the company in the years before it moved to suburban Chicago, where it is now a part of Sears Holding Corp.

“Sadly, of course, they are no longer here,” Stewart said.   “We thought about buying it … but I didn’t buy it – I should have. And so that’s one of the regrets, not buying Kmart.”

She went on to describe how she managed to curate the Martha Stewart brand and maintain its quality over many years and many products, from dish towels to lawn furniture. Her company, Martha Stewart Living Ominmedia, was sold last year for $353 million to Sequential Brands Group, and Stewart continues at the company.

Stewart said that unlike some brands that license their names for products, “we actually do all the design work, we do all the packaging, we do lots of advertising, lots of promotion for the particular products,” she said, “so when we design something for Petsmart, we try it on the dogs — actual real, live dogs.”

Quizzed on her management style, Stewart said she tries “not to be so dictatorial as helpful, encouraging.” She explained how there is an organizational chart in her workplace that uses tree leaves instead of organizational squares.

“And my leaf is the beech leaf. Change a couple letters … and the bitch leaf is just fine with me,” Stewart said, drawing laughter from the audience. “And it’s the mother of all trees. That’s why I am the beech.”

During his on-stage interview, Strahan, who co-hosts “Live with Kelly and Michael”on ABC, took questions on the network’s surprise announcement that he will move in September to become co-host of “Good Morning America.” His “Live” co-host, Kelly Ripa, was reportedly blindsided by ABC’s decision and has taken the week off work.

“That was shocking to a lot of people. But it’s a network decision,” Strahan said.

Getting to host “Live” is “probably the best job in television,” he said. “But at the same time you do what your company needs you to do, and you’ve gotta challenge yourself.”

A native of New Jersey, Kelly made a goal in high school to become the first person to walk on planet Mars. To reach the goal, he planned to become a naval aviator, then a Navy test pilot, then an astronaut.

Unfortunately for Kelly, the country wasn’t ready for any manned missions to the red planet, although his career planning did take him into space on four occasions. His final mission in 2011 was also the final flight of the shuttle Endeavour.

But Kelly’s astronaut dreams almost fell to Earth in the mid-1980s due to his initial lack of aptitude for landing jet fighters on aircraft carriers. Kelly recalled how it took him seven tries to stick a carrier landing during his first solo flight, a dismal performance that prompted his flight instructor to ask, “are you sure this career is for you?.”

He didn’t give up.

“I really believe that how good you are at the beginning of anything you try is not a good indicator of how good you can become,” Kelly said. “I am a prime example of somebody who is able to overcome a serious lack of aptitude for something — with practice, persistence, just not ever giving up.”

Kelly also recounted his near-death experiences dodging surface-to-air missiles in a A-6 Intruder during the first Gulf War, and two decades later hearing the news that his wife, Giffords, had been shot in the head during a constituent meeting in Tucson, Ariz. Six people died in the shooting. Giffords survived, but with lasting injuries.

“I realized that this was going to be the biggest challenge, personally and professionally, in my life,” he said.