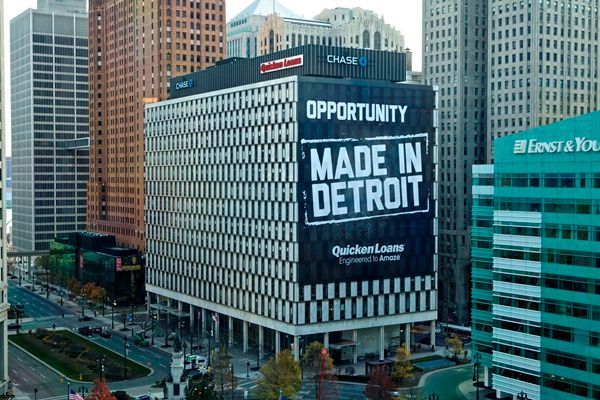 Quicken Loans Inc. founder Dan Gilbert said 3,100 of his workers live in Detroit, up from the 77 who lived in the Motor City when Gilbert first moved his online mortgage firm downtown in August 2010.

If they could find a place to live in the city, “there would probably be another 2,000 …,” Gilbert said.

The revelation came Wednesday night in front of an estimated 700 people who filled a Wayne State University auditorium to hear the billionaire talk about his Detroit roots and his vision for the city. Gilbert earned his law degree from Wayne State by attending night classes while delivering pizzas and then selling real estate, mainly in Southfield. That real estate business led him to what would become Quicken Loans, he told the crowd.

The event was a wide-ranging question-and-answer session, moderated by WSU Law School dean, Jocelyn Benson, in which Gilbert said he is a third-generation Detroiter, whose father owned an east-side bar. One of his first childhood memories is a rare instance in 1967 when his father didn’t open the bar because of the 1967 riots.

Nearly six decades later, Gilbert is considered a key player in the city’s revival. In less than six years, Gilbert and his Bedrock Detroit, formerly Bedrock Real Estate Services, has become a major force in a booming downtown.

His Detroit investments began in summer 2010, when Gilbert and the first wave of Quicken Loans Inc. workers moved into their new downtown headquarters from Livonia. Back then, Gilbert didn’t own an inch of downtown. Now, the total square footage of all the property he owns or entities linked to him is larger than the main campus of Wayne State University.

He moved downtown to continue to attract young talent, who increasingly told Gilbert and Bedrock officials they didn’t want to work and live in the suburbs.

“I (would) always say to myself: If we just come down here and just be in two buildings, we might as well be in the suburbs,” he said when asked why he and Bedrock started to amass downtown property. “If we are going for this, we are going to do as much as we can. Let’s make as much impact as we can. It was one of the best decisions we ever made.”

Bedrock said it has invested nearly $2.2 billion in acquiring and renovating 80-plus properties downtown. He possesses prized skyscrapers, a major chunk of Woodward, the Greektown Casino & Hotel and at least 17,000 parking spaces.

Gilbert is founder of Quicken Loans, the national online mortgage firm, but he has also a wide array of other entrepreneurial interests that is helping fill his buildings. More than 15,000 workers are in Bedrock-controlled properties, according to Bedrock.

His buying binge may be unprecedented for a major American city, some developers and others say.

Now, he’s talking about building new, including making an iconic statement on the former Hudson’s site — with details expected in April, the third delay in finalizing the development agreement between the city and developer since December. The site is an empty block on Woodward where the famed J.L. Hudson department store once stood.

City officials say the delay is due to finalizing small details, particularly in the sale of a 900-space parking garage underneath the site. The garage was not included in the original terms of the development agreement.

Early designs of the Hudson site released last year show a swooping glass-and-metal structure that looks like nothing in Detroit now. The space will have 250 residential units, 225,000 square feet of mixed-use commercial or retail space, as well as a “programmed civic space,” according to a city document provided last year.