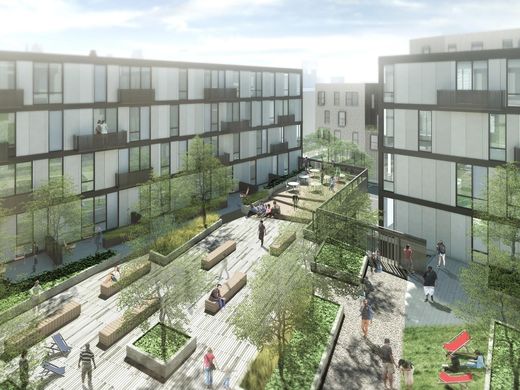 Not since the Lafayette Park project a half-century ago has Detroit seen a residential development as ambitious as Dan Gilbert’s Brush Park project that breaks ground in a few weeks.

For one thing, the project — about 100 for-sale units and about 300 rental apartments on 8.4 acres just north of downtown — will come in at the top end of the price range for any rental or for-sale projects in the greater downtown when it opens in a year or so.

But more significantly, Gilbert’s people are breaking new ground architecturally. Gone are the faux historical styles that marked so many of Detroit’s recent projects. Instead of duplicating the peaked roofs, gables, chimney stacks and bay windows that pass for authenticity, Gilbert’s team opted for a bold modernist look.

This will be unlike any recent residential project in Detroit. The clearest analogy may be Lafayette Park. Built in the 1950s and led by modernist master Ludwig Mies van der Rohe, it introduced sleek glass and steel buildings with flat roofs and great expanses of glass married to a thoughtful park-like plan. It created something new in Detroit and remains among the city’s most successful districts.