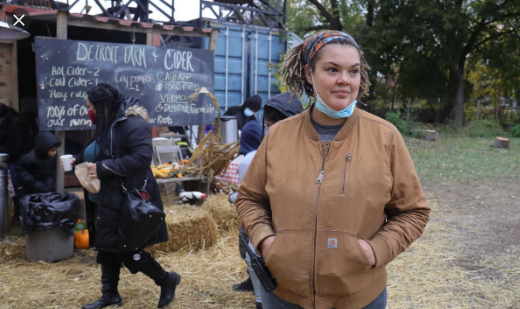 As a child growing up in a turbulent home with a mother who abused drugs, Leandra King constantly faced a paralyzing anxiety that would completely consume her.

To calm down, she would find a quiet place outdoors and pile mud and dirt on her body.  At the time, King didn’t really know why she did it or understand why it helped. The outdoors was simply a positive space where she could go to escape that anxiety. But the Detroit resident later learned that immersion in nature can have a restorative effect for those dealing with mental health problems. King recently opened Detroit’s first cider mill, a venture she hopes will share that same kind of positive space with her community.

“Whatever you’re experiencing in your life, being connected with the Earth will help [you] heal and there’s a lot of healing that’s needed in our city,” she says.

About 18 months ago, King bought a four-acre plot of land that was an abandoned school in the Dexter-Linwood neighborhood. There, she opened Detroit Farm and Cider: what she says is the first Black-owned cider mill in the country.

On what she describes as a slice of rural paradise in the midst of the city, King has an orchard consisting of 139 different fruit trees ranging from apple, peach, cherry and pear. She has goats and chickens for a petting zoo, horses, hayrides, zip lining for kids, live music, as well as 10 garden plots and three greenhouses where she grows everything from squash and brassicas to strawberries and pawpaw patches. “People get to come and experience a farm-like environment. It’s something that’s not typical of Detroit,” King says.