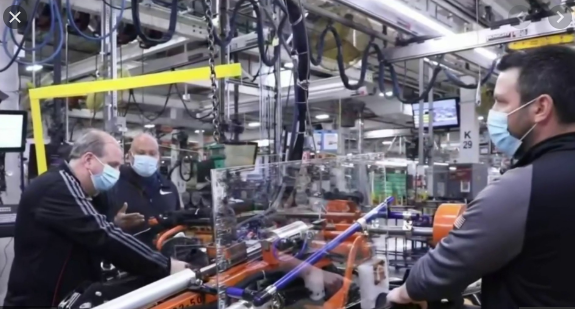 Metro Detroit’s Big Three automakers — General Motors, Ford and Fiat Chrysler — have restarted production after being shut down for nearly two months because of the coronavirus (COVID-19).

Operations won’t go on as usual, though, as all three have implemented new safety protocols.

Many changes began popping up in auto plants last week.

FCA officials showed Local 4 the work being done inside the Sterling Heights Assembly Plant to mitigate the spread of the virus.

Officials in the Big Three have made it clear the No. 1 line of defense is personal protective equipment — masks, shields and eye protection.

“That mask should be containing everything so that nobody else can be breathing it in,” said Dr. Jeff Hess, General Motors’ medical director.

One of the key concerns from workers is large fans blowing in their faces inside hot plants.

Hess said the fans have been moved, but they’re necessary for air circulation.

“You don’t want it blowing in your face, but the air movement (is critical) so the virus isn’t sitting in an area for awhile,” Hess said.

Local 4 spoke with current and retired workers to see if they feel safe going back to work.

“I don’t think we’re ready yet,” said Vern Rottman, of Warren. “If they would have said July 1, I would have been a lot more amenable to starting at that point in time.”

“It’s a confined space (with) a lot of people,” another worker said. “I don’t want anybody to get sick. That’s what I’m worried about.”