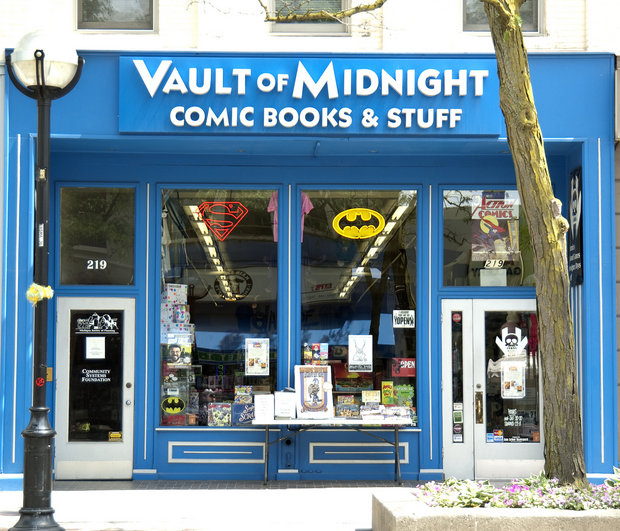 Vault of Midnight plans to open their new comic book store May 2.

The Ann Arbor-based shop in February announced they had started work on the 1226 Library St. location, which nestles under a wing of Dan Gilbert’s Z Garage parking deck.

According to an event posted to the company’s Facebook page, the Detroit store will open at 10 a.m. May 2.

“We’ll have a full compliment of Earth’s Finest comic books and graphic novels, board games, apparel, vinyl toys, and much, much more,” the event details read.

In a February announcement, Gilbert’s Bedrock Detroit said the store will fill a 2,000-square-foot space around the block from Punch Bowl Social and Henry the Hatter, and down the block from the Library Street Collective art gallery.

The location could potentially pull foot traffic off Woodward and around the old Hudson’s site, which would have shoppers walk past restaurants, art galleries and The Belt, Bedrock’s prized walkable art alleyway.

“As soon as we saw The Z and The Belt, with their bold artwork and graphics, we knew we’d found the perfect home for our Detroit location,” Curtis Sullivan, co-owner of Vault of Midnight, said in the February release. “Vaults of Midnight exist in real, brick and mortar buildings in real, vibrant communities and there is no place more exciting right now than downtown Detroit…”

Vault of Midnight has locations in Ann Arbor and Grand Rapids. It opened in 1996, and won the 2010 Eisner Award for “comic book-related excellence.”

According to a release, the Detroit location “will have a distinct look, feel and design with a glass window façade and custom shelving and fixtures” from Michigan companies.

The comic book shop is filling one of the last open retail spaces in Gilbert’s Z Garage, which now includes several restaurants, art spaces, a sneaker shop and yoga studio.

Also opening in Gilbert spaces in May: The much-anticipated Nike Detroit Community Store.

MLive broke the news in early April that the store will open May 26. Nike had painted the opening date on construction barricades outside of the store.

Down the street, crews are working on a “technical cashmere” retailer, Kit and Ace, downtown location as well.

Ian Thibodeau is the business and development reporter for MLive Media Group in Detroit. He can be reached at ithibode@mlive.com, or follow him on Twitter.