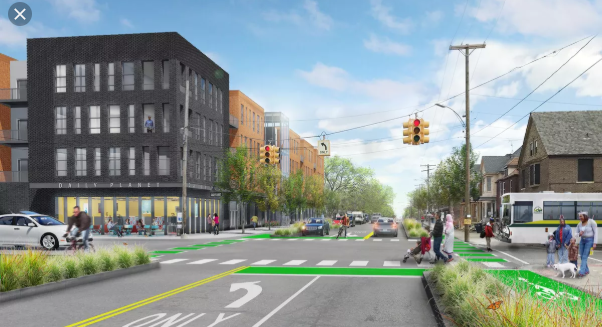 Back in the early 2010s, when Capital Impact Partners started heavily investing in Detroit, it did so with the express purpose of growing density in the urban core.

In partnership with the Kresge Foundation—and with the support of numerous other financial institutions—the national nonprofit lender launched the $30 million Woodward Corridor Investment Fund. It lent money to a bevy of projects, like the Scott, James Scott Mansion, and the Forest Arms Apartments, with the goal of growing housing density in and around Midtown.

Capital Impact Partners could have continued to invest exclusively in projects in high growth areas of the city. But over the last few years it’s been reevaluating its, well, impact and how it can help developments get off the ground in neighborhoods that hadn’t seen much in a long time.

“We try to see things through the lens of equity and inclusion,” says Nicholas Pohl, business development officer at Capital Impact Partners. “Systemic disinvestment occurred along racial lines, and that’s especially true in Detroit. And that’s part of our strategy of inclusive reinvestment.”

Capital Impact is trying to do inclusive reinvestment in a number of ways.

The most obvious avenue is through more lending. In Detroit, where there’s still a large gap between what a development costs and what market rents can support, a number of financial tools have to be leveraged to get nearly every project off the ground. That could be subsidies, grants, or low-interest loans from financial institutions like Capital Impact.

But that gap is even higher in neighborhoods where rents tend to be lower. Which make investment from nonprofit lenders all the more necessary.

In 2014, this time in partnership with JPMorgan Chase, it launched the $30 million Detroit Neighborhoods Fund. Subsequently, Capital Impact has lent to B. Siegel’s Detroit, a $8.3 million mixed-use development on the Avenue of Fashion; Parker Durand, a $22.5 million development that will bring 92 apartment units to the West Village; a $8 million redevelopment of a former Packard Showroom in the North End into 38 units; and more.