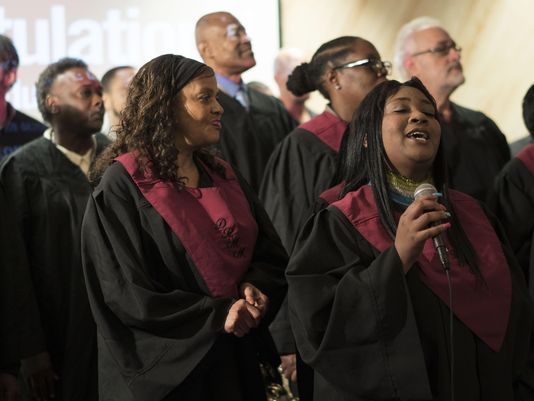 Two years ago, Lakita Terrell depended heavily on the streets as she desperately searched for housing and a place to work.

“I was in between a custody battle for my children, and I didn’t have anywhere to go,” Terrell said. “Now, I am a success, but all of us are a success, too.”

Terrell and 299 of her peers graduated Friday afternoon from the Detroit Rescue Mission Ministries’ life-betterment program.

The men and women completed programs at various Detroit Rescue facilities, where the received job training, detox treatment and housing.

Before each graduate waited anxiously for his or her name to be called, the packed banquet hall of the rescue mission on E. Forest erupted in loud cheers and claps as Kem, a Detroit native and R&B singer, appeared from the audience to give words of encouragement.

Kem, whose real name is Kim Owens, was also a client of the rescue mission.

“I have been sober for an uninterrupted 26 years,” Owens said. “Although you have come this far, you are not done yet.”

Chad Audi, CEO and president of Detroit Rescue Mission Ministries, said even after the program is over, his organization is there to support the individuals who walk through its doors.

“We want to see everyone soar. The journey to sobriety, self-direction and self-reliance can be a difficult one,” Audi said. “At the Detroit Rescue Mission, we keep our promise, and we make sure we are always there every step of the way.”

As the program came to a close, Terrell was one of two people surprised with cars for their outstanding achievement in the program.

Terrell broke down in tears before collecting keys to a 1996 Lincoln Town car.

“The skills that I learned at the Detroit Rescue Mission helped me to grow up,” she said. “I have matured and become a better woman for myself and my children. I will be forever thankful.”

Founded in 1909, the rescue mission provides food, shelter and services to homeless and individuals who are faced with substance abuse.

The nonprofit organization provides more than 4,000 meals to the hungry daily and serves 2,200 men, women and children in its facilities in Detroit and Highland Park.

Also during the ceremony Friday, Karen Bouffard of The Detroit News along with Mohammad Qazi, founder of Ciena Healthcare, Wayne County Circuit Court Judge Timothy M. Kenny and WJBK-TV’s Amy Lange were awarded Pillar Awards for the impacts they made in the community.

News columnist Bankole Thompson and Mitch Album of the Detroit Free Press were guest speakers at the event.