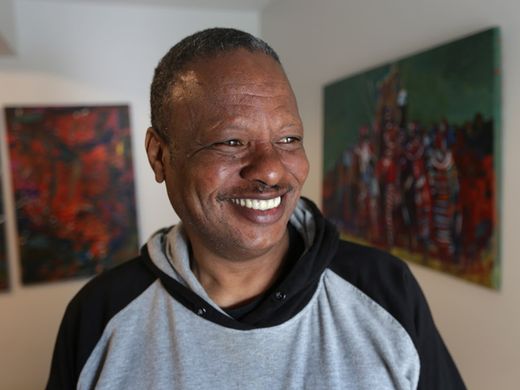 A slow smile crept across the face of Detroit veteran Charles Montague as he peered around his new apartment in the heart of the Cass Corridor, just blocks from bustling redevelopment in Midtown.

After more than a decade of tumultuous times, Montague has finally landed on his feet.

Montague, who was homeless and lived on the streets of Detroit for two years, battled drug addiction for 18 years and a handful of mental disorders — schizophrenia, bipolar disorder and post traumatic stress disorder — after serving in the  Air Force from 1977 to 1989.

Montague, 56, said he never believed his old crime-ridden neighborhood would be revitalized — especially the historic Charlotte Apartments building near Cass and Second, which was built in 1920 and known in recent years for being a drug haven and hotbed for crime.

Now the building will be home to him and 26 other Detroit veterans, homeless individuals and people with disabilities. A $6.1-million project led by local developer Joseph Early and Detroit Central City Community Mental Health transformed the building, creating twenty-seven 750-square-foot one-bedroom units. The building, which offers low-income rent for tenants and support services from Detroit Central City Community Mental Health, opened to tenants in mid-March and is the latest housing available through the agency.

To read more about this story, visit http://www.freep.com/story/news/local/michigan/detroit/2016/04/24/61m-project-creates-housing-veterans-detroit/83464350/