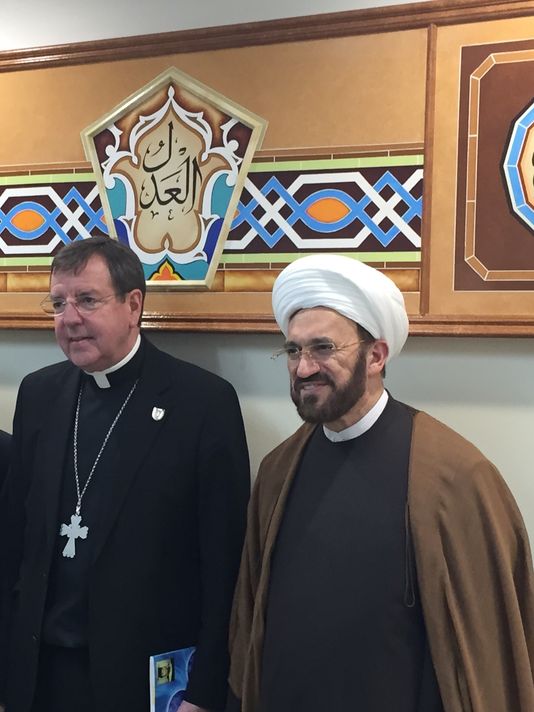 The religious leader of metro Detroit’s 1.3 million Catholics visited a mosque in Dearborn Heights on Tuesday, promoting interfaith cooperation at a time of concern about extremism in politics and terrorism.

“It’s the latest of the many kinds of steps we’ve taken together to build up our communities and also to create an atmosphere of mutual respect,” said Catholic Archbishop of Detroit Allen Vigneron at the Islamic House of Wisdom in Dearborn Heights. “Relations are very good…I wanted to offer my affirmation of the importance that we bring of our various faiths to the common good … our faiths give us the strength to work together for peace.”

Vigneron and other Christian and Muslim leaders were invited to the discussion and lunch by Imam Mohammad Ali Elahi, the religious leader of the Islamic House of Wisdom. Elahi organized the event to show his appreciation for Pope Francis’ outreach to Muslims and others. Elahi strongly condemned terrorism and also anti-Islam rhetoric by some politicians.

“Islam really is a religion of mercy,” Elahi said. “ISIS and terrorism, they have nothing to do with Islam, because they are the ones who hurt our religion, they hurt our people. They have no benefit to us. This ISIS, Al-Qaeda, Taliban, Boko Haram, they are a curse for our faith, for our people, for the humanity.”

The meeting is one of several interfaith efforts that have been held in recent months in metro Detroit amid concern about some of the campaign rhetoric from presidential candidates such as Donald Trump, and the issue of terrorism. In December, Vigneron released a statement criticizing Republican Trump’s comments on Muslims and anti-Islam prejudice.  Also attending the interfaith event were leaders with Pentecostal, mainline Protestant, and other denominations.

Tuesday’s meeting was held a couple of weeks after Elahi received a letter from a person saying he was with the Ku Klux Klan that told Elahi to leave the U.S. or be killed. Elahi said he notified the FBI about it. Vigneron condemned the threat, saying that the KKK has often targeted Catholics, too.

Interfaith leaders hope that cooperation in metro Detroit can serve as a model for others.

“We are truly a model for the rest of the world,” said Robert Bruttell, chairman of the Interfaith Leadership Council of Metropolitan Detroit. “We get along better here than any other community in the world…We have to show how to work together.”

Dr. Hassan Amirikia, of Southfield, who attended the meeting, said that people should unite as Americans instead of being divided along religious lines.

“The interests of this country is No. 1,” he said.

Vigneron said that interfaitih cooperation has taken place for decades and that the previous head of the Catholic Archdiocese of Detroit, Cardinal Adam Maida, had created a program to promote dialogue among religious groups.

“We really believe that the path to peace, the path of unity, is dialogue,” Elahi said. “Dialogue is not just a conversation, but an engagement for commitment.”