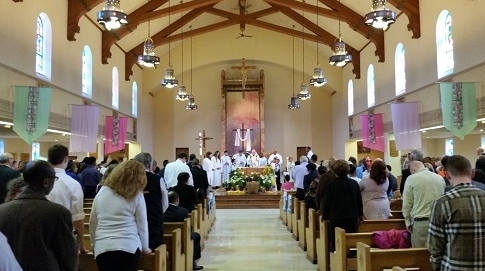 A church with one of Detroit’s four remaining Catholic elementary schools will host the final Mass Mob of 2017. Christ the King Catholic Church is welcoming visitors to its 10:45 a.m. Mass on Sunday, followed by free food afterward in the fellowship hall. Alumni and members of the public are also invited to tour the church’s elementary school. Read moreSecret JFK files are peppered with Detroit people, places and incidentsDetroit’s Bishop’s Mansion sells for more than $2.5 million Christ the King, at 20800 Grand River Avenue, was founded in 1927 with about 300 families. The school opened in 1938. The permanent church was dedicated in 1962. Today, many parishioners are from the Rosedale Park neighborhood, said office manager Nicole Evans. There are also many people who moved from the area years ago but still maintain close ties to the church, she said.  FacebookTwitterGoogle+LinkedInPhotos: Christ the King to host 2017’s final Mass Mob FullscreenBuy PhotoAt Christ the King Catholic Church in Detroit, the sanctuary has a loft feel with exposed beams. The Mass Mob will attend mass on Sunday, Nov. 12 at 10:45 a.m., the last one of 2017.  Kimberly P. Mitchell, Detroit Free Press