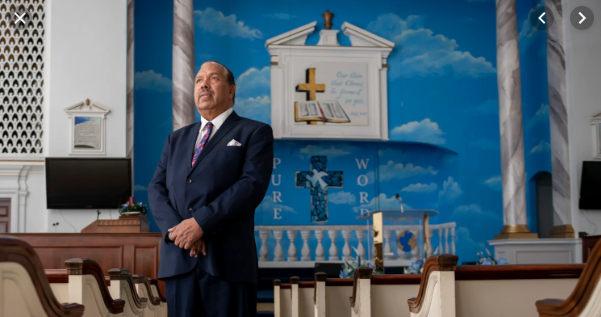 A part of the city’s history exists within a church with a tall white steeple at Grand River and Evergreen on the west side.

To celebrate, Pure Word held a special worship service, with guest speakers, praise dancers, dinner and a photo shoot to commemorate the achievement.

“Beautiful structures of this type of workmanship will never be built again,” said the Rev. Samuel Stephens, pastor of Pure Word. “Future generations will be able to see the actual structures that early worship was held in.”

The building has the distinction of being the city’s first church to feature air-conditioning and an amplified sound system.

In addition, the church features a sanctuary, a two-story reading room, multipurpose rooms, offices and a Sunday School wing. The church also includes a bomb shelter and an underground tunnel.

“I just knew this church was a historical place just walking through,” Stephens said. “You can tell by looking at the workmanship and the stones and columns on the exterior.”

Stephens said the designation was the culmination of a two-year process working with the Detroit Historical Society.

Gerrick Landsburg, director of the historic preservation for the city of Detroit, says it’s an honor for a building to be recognized as a historic site designation.