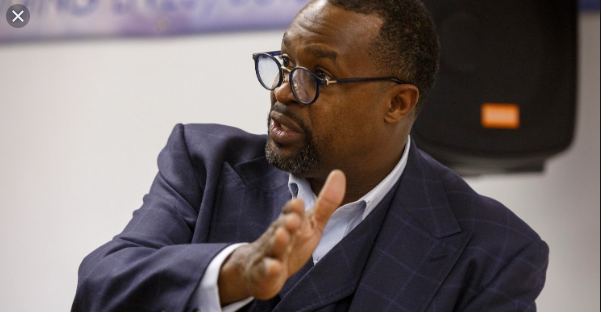 Detroit Pastor Terrence Devezin argues not enough is being done for men who were recently exonerated and released from prison after being wrongfully convicted decades ago and is trying to raise money to help them.

Devezin, the pastor of the United Kingdom Church on Detroit’s west side, says he wants to help the mostly Detroiters get back on their feet by helping them find jobs, housing and assistance with their daily needs.

So he has set up a GoFundMe page named Justice for the Michigan 13 that aims to raise $260,000 to give $20,000 each for 13 individuals and help them get a second start in life. They are also owed a public apology for the many years they served behind bars for crimes they never committed, the pastor said.Pastor Terrence Devezin asks wrongfully convicted and exonerated men about their experiences during a Welcome Home ceremony at the United Kingdom Church in Detroit. (Photo: Elaine Cromie, Special to The Detroit News)

“Now that they are released, they have to fend for themselves,” Devezin said. “I feel these men have been taken to a remote island and dropped off.”

Jesus would help the men, he said. Many people are likely to want to help, the pastor said, since many “feel strongly about innocence.”

Justly Johnson, 44, was released from prison after serving 18 years for a 1999 Mothers Day murder of a mother of three that he and another man, Kendrick Scott, were wrongly convicted of. They were exonerated with the help from the Michigan Innocence Clinic and the testimony of the woman’s son, who said the men were not his mother’s killers, and other new evidence.