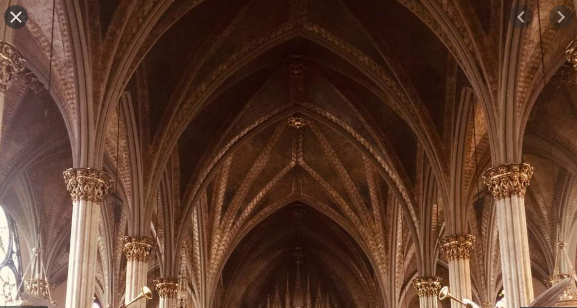 Opened in 1893, Sweetest Heart of Mary Church is one on Detroit’s hidden gems, sitting right on Canfield and Russell Streets.

In 1871, 300 Polish families created the St. Albertus Parish. Dominic Hippolytus Kolasinski was named pastor of the parish, according to the Detroit Historical Society.

In 1885, a faction split the parish over Kolasinski. He was suspended from the parish and reassigned.

Kolasinski returned to Detroit in 1888 and formed Parish of the Sweetest Heart of Mary outside the jurisdiction of the Archdiocese of Detroit with several members of his former parish.

Construction began on a church-school building, but the building was thought to be too small in the middle of its construction. The architectural firm of Spier and Rohns went on to build the late Gothic Revival style church that stands today.

There are several stained class windows, with the south side windows featuring images of Jesus working in his father’s carpentry shop. The north window is dedicated to Saint Vincent de Paul, who spent his life serving the poor.

It is known for its annual Pierogi Festival, the largest one of its kind in Detroit. This year’s festival is Aug. 7-9.